Around 80 Palestinians and international activists held a peaceful demonstration today in the village of Iraq Burin to protest the theft of village land for settlement construction. The demonstration began at about 16.00 when protesters marched through the village and over the hills towards the illegal settlement of Bracha. The peaceful demonstrators carried Palestinian flags and banners calling for an end to the occupation and for justice for Rachel Corrie whose trial continues tomorrow. They were immedietely met with a barrage of tear gas from the Israeli forces. The demonstrators had been at the top of the hill for only fifteen minutes, peacefully chanting slogans about freedom for Palestine and an end to the occupation and illegal settlements, when troops began firing tear gas at them. The protesters were forced to retreat quickly down the rocky hill as the soldiers shot at them; they narrowly missed the protesters and caused some to suffer adverse effects of strong teargas inhalation. One man was taken away by paramedics as he suffered from asphyxiation. The army continued to fire on protesters as they made their way down the treacherous hillside. However undeterred by the army’s brutality and disproportionate response to the peaceful protest, the villagers plan to continue their demonstrations on a weekly basis.

Iraq Burin is a small village 8 km southwest of Nablus. The illegal settlement of Bracha is located about one mile southeast of the village, and is situated on around 100 dunams (25 acres) of village land, as well as more land from surrounding villages. As with other settlements, it is not just the actual land of the settlement that is a problem, but also the land near it There is a swathe of “off-limits” land around the village that farmers are often prevented from using due to its close proximity to the settlement, leaving them with less land to graze sheep on or harvest from.

The villagers of Iraq Burin held weekly demonstrations last year to protest against the expansion of Bracha, and their continuing inability to access the village’s agricultural land. This began as a reaction to a sharp increase in provocative (and often violent) attacks initiated by residents of the settlement. These attacks were frequently aided and abetted by the Israeli military, who in turn invaded the village, firing rounds of tear gas, rubber-coated steel bullets and live ammunition at Palestinian civilians. However the village took the decision to stop the weekly protests when Mohammed Qaddous (16) and Asaud Qadous (19) were shot dead by the Israeli military during a demonstration. 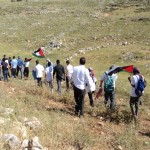 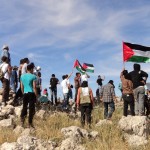 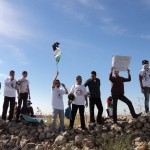 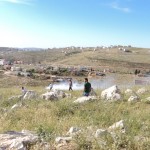 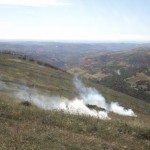 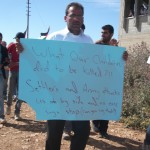