Women of the Bedouin herding hamlet of Khirbet Amniyr sat on the earth and watched Israeli forces demolish their 12 tent homes for the third time on Thursday morning. The women said they were waiting for the soldiers to leave so they could rebuild their tent homes and once again re-establish their lives and livlihoods.

Amniyr, south of Yatta in the southern West Bank, is said to be located in an Israeli military zone. Military zoning laws enforced by Israel’s Civil Administration, make up part of the 60 percent of the West Bank that is inaccessible to Palestinians.

As the troops left, the woman remained seated, surveying the destruction, as their tents and mattresses lay buried under a thin layer of dirt.

“I appeal to God to save us from the cruelty of the Israeli occupation,” said the hamlet’s matriarch, as she stood and began to collect her belongings from under the dust.

The hamlet has been taken down twice before, first on February 22 when the Israeli military buried homes and water wells, later preventing ICRC workers from delivering aid equipment. On March 29, seven Bedouin were beaten by Israeli border police when the same 12 tents were taken down a second time.

The 12 families of Khirbet Amniyr were ordered out of their tent homes earlier in the year, but remained, saying they had little choice but to stay and had nowhere else to go.

The spokesman of Israel’s Civil Administration could not be reached by phone for comment on the latest demolition.

Amniyr is one of three Bedouin hamlets currently under Israeli evacuation orders, with a second in the south Hebron hills area, and a third in the northern West Bank district of Nablus which has been demolished six times. In Israel’s Negev region, the Bedouin community in Al-Araqib have seen their homes taken down a total of 16 times, to make way for a park. 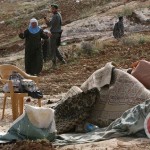 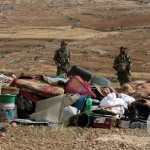 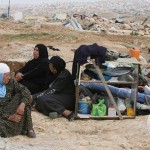