On Tuesday 19 April in Burin a small village in the West Bank of Palestine, Aby Rusli-Eid, 36 year old Palestinian was savagely attacked by an armed gang of Israeli settlers from the nearby illegal settlement of Arusi.

Aby Rusli-Eid is a policeman for the Palestinian Authority in the West Bank and was attacked at around 6 pm. His house is the closest in the village to the illegal settlement. Aby Rusli-Eid was sat in the living room with his wife and his five children when he heard loud shouting from outside the house, he went outside sure in the knowledge that there were armed settlers nearby but bravely choosing to keep the violence as far away from his home and his family as he could, he closed the door behind him to try and protect them.

There were around 20 heavily armed settlers outside, carrying both semi automatic rifles and handguns. Aby was shot twice almost immediately, once in the arm and once in the stomach. He is currently stable and recovering in hospital but whether he will regain the mobility of all of the fingers on his right hand is currently unsure.

According to Aby Rusli-Eid this is not the first time; over the last two years his house has been attacked more than five times, both with bullets and with petrol bombs. Two other men were also shot but were in a much better condition and had already left the hospital when the interview was conducted. The other men were shot trying to get to Aby Rusli-Eid’s house to try and help his family. The settlers who attacked apparently wore no face masks and walked around brazenly within the village.

Settlers from the same illegal settlement apparently last attacked the village no more than two days ago, coming to the top of the hill overlooking the houses and shooting live rounds sporadically into the village, luckily no one was injured.

This time the Israeli army turned up an hour later, long after the settlers had returned to their illegal houses. Much too late to do anything other than fire tear gas at the Palestinians from the village who had gathered at the home which had been attacked to try and support the family living there. According to witnesses on the scene two men were also taken to hospital suffering from inhaling too much of the gas. When the ISM team got there at least two shots were fired by the soldiers in the direction of the village, but to what end it wasn’t clear.

Aby Rusli-Eid has had his family moved to a safer house so they will be protected for now, but when asked if he thought it likely the settlers would return his reply was unequivocal “yes they will return.” 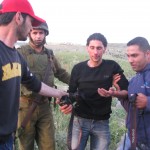 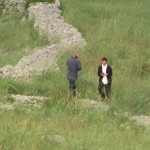 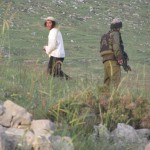 Army are idle as settlers attack 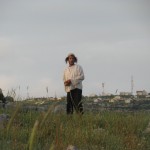