Children and youth under fire in Gaza: two killed and more than ten injured

On Friday April 8th at approximately 5.30 pm a drone dropped a bomb on a group of children and young people who were playing football next to a school in the Al-Shijaija neighborhood, east of Gaza City, near the border. People hurried to come to the rescue of the injured when a second bomb hit the exact same place. A child and a young man were killed, while 10 more civilians were injured, including a paramedic and six children.

It took a day to identify the brutally dismembered body of a young man after initially only a headless body was found. It belonged to 23 year old Bilal Mohammed Al A’arer.

Mahmoud Wa’el Al-Jaro is the name that goes with the other young face, drained of the joyous expression it had until the vicious attack. The bewildered dead darkness in his eyes and his half open mouth makes one feel and see the moment. A split second: the abrupt discontinuity of his activity, the inner alarm that causes panic, the anxiety that instantly swells to mortal fear and is immediately followed by death, mercilessly cooling the intensity of his last life experience. Ten years old he was and he has paid dearly for trying to enjoy his young life, playing football under Gaza’s dangerous sky.

In the mourning tent, one of Mahmoud’s cousins, Yasser el-Jaro, explains how this is not the first time that the Israeli army has targeted children. Ramadeen Mohammed el-Jaro was nine when in 2003 a bullet, fired from an Apache, hit him in the head. He was on his way home from school when he was killed. 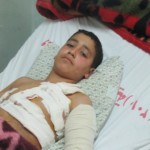 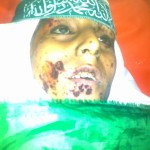 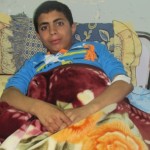 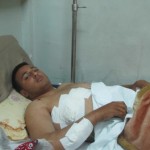 “They deliberately target children, it can’t be an error. They have the most advanced technological weaponry. They kill civilians because they want the population of Gaza to rise up against the resistance. They want people to start hating the resistance, but it is not the resistance who kills our children. We ask the international community to protect our children and our women from Israel.”

The injured were brought to Shifa hospital in Gaza City. 12 year old Jaber El-Kouss was one of the boys playing football when they were directly targeted by one of the drones, that have been buzzing loudly in Gaza’s sky over the last two weeks. But life goes on, despite the constant threat of violence. “This is our life. What else can we do?”, sighs one of the men in the hospital room, indicating that life in Gaza is uncertain and the threat of destruction and violence is always there. Jaber’s father, Salim, jokingly says the injured have themselves to blame as they have chosen to live despite the risks. While the people around him are laughing, Jaber misses the joke and feels accused. Softly he says: “But daddy, I was only playing…” His punishment for playing is severe: seven pieces of shrapnel pierced his chest and belly, while other pieces are stuck in his arm.

Next to him lays Osama Mahmoud El-Ghoula (15), he wasn’t playing football with his friends, but he heard the bomb and ran to the scene to see what was going on. While running a second bomb dropped from the sky, injuring young Osama. He went home, but was afraid to tell his parents what had happened and did not want to worry them. “He said; ‘Mom, I just want water and need some sleep’. I saw the blood coming through his shirt and lifted it to see what had happened to him and then he lost consciousness”, says his worried mother, Sana El-Ghoula. Osama is now waiting for surgery to remove the shrapnel from his belly.

In the third bed lays Riziq Said El Imalwi, an 18 year old university student. He was returning home after visiting the graveyard where his two brothers, who were martyred by the Israeli occupation forces, are buried. While walking, the ambulance stopped to ask for directions of the bombed place. He drove along with them to point out the place and when he got out, he was hit in the arms, chest and legs by shrapnel from the second bombing. Riziq lays silent in the hospital bed, while his saddened father Said says: “These are crimes against humanity, they shoot civilians! We are all sad, but keep on hoping for peace in all of the country.”