New
Home / Features / Life and death in the buffer zone

Life and death in the buffer zone

Death comes quickly at a place like this. On sunny winter days, when the smell of the night’s rain is still in the air, as if it would have brought some hope for the raped, barren land of Gaza, overrun hundreds of times by Israeli tanks and bulldozers. The land between the foothills of the village of Bait Hanoun and the Israeli border, guarded by watchtowers, soldiers, snipers, helicopters and drones is a land in which death is a regular guest. 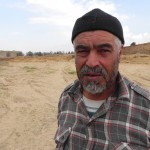 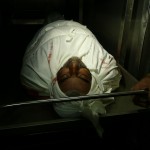 Shaban lays in the morgue 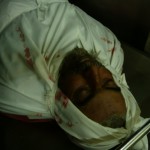 Shaban lays in the morgue

But despite all that, the 65-year-old Shaban Karmout probably had something like hope when he woke up on that winter morning. His house is in the 300 meter wide strip of land in the so-called buffer zone. He built his house 40 years ago, in 1971, when Gaza was already occupied by Israel, and yet he thought to have a future there for himself and his family. Shaban began to plant fruits, his land was full of palms and trees, lemon, orange, clementine and almond trees were growing there. He had a good life.

But in 2003, just at the time of the almond harvest, the Israeli bulldozers came in the middle of the night. It took them three hours to raze the work of 30 years to the ground. Since the Israeli attack in 2009, he could no longer live there, the buffer zone had become too dangerous, where his home was, which has now been declared a closed combat zone by Israel. He had since lived in a small rented concrete house in the middle of the refugee camp near Bait Hanoun, in Jabalia, cramped in a tiny apartment with his large family.

He went back to his land, every morning, and worked there until the evening. He and his family had to make a living from something, after all. And so this morning, in the morning of the 10th January 2011, he woke up with hope, around 4 o’clock, and left for his fields. Full of hope he was because he and his neighbors had recently received a new well, their old one had been destroyed by an Israeli tank incursion. The Italian NGO GVC had built the well, it was financed by the Italian government.

On that day he was visited by an employee of the organization, to see how his situation had improved. She had an interview with him, and he asked her to come into the house, as it would be not safe outside. As she left, he advised her to rather take a short cut, you never know. He told her that he himself still had to go into the garden once more to tie his donkey. The NGO worker had just reached the village of Bait Hanoun, as three shots fell. One hit Shaban in the neck, two others in the upper part of his body. He was dead on the spot.
“It’s like a nightmare,” the Italian said, stunned. “I will never see him again. From here to the morgue in two hours. ”

In the interview that he gave shortly before his death, he told me about the unbearable situation in which he had been living. “It felt as if someone had ripped out my heart,” he described the night in which he lost all his land under the blades of eight bulldozers. And he told how he and the farmers from the neighbor fields had risked planting yet again, you have to make a living from something after all, and had grown wheat. When it was ready to be harvested, it was burned down by the Israeli army. And he told how he and the farmers from the neighboring fields yet again had the courage to plant, the children have to eat something after all, and tried to grow wheat. When the workers went to the field to sow, they were fired upon by Israeli soldiers.

What he now makes his living from, he was asked. “I collect stones and wood, and I grow some crops in my garden,” he replied. Crops, for which he had recently gotten water, thanks to a donation of a well from the Italian government. Shaban therefore probably looked somewhat optimistically into the future, the well could have restored the income from his garden to him. This was his only income since it had become too dangerous for him to enter his fields. “At any time the Israeli bulldozers can come again to destroy my house, you never know what they do next,” he said. Whether he isn’t afraid to be there, the employee of the NGO asked him. “No, I don’t mind the shooting too much,” he replied. “Even if something happens to me, humans can only die once. And only God knows when I am going to die.”

His nephew, Mohammed Karmout, stood a bit apart from the morgue. “The Israelis know my uncle very well,” he says quietly. “He’s there every day, and the whole area is monitored by cameras and drones. They know he lives there.”
And so it is quite doubtful that only God alone knew that Shaban would die at that day, while he was tying his donkey, by three shots in his upper body.

Shaban Karmout is the third civilian being shot dead in the buffer zone in the last month. At Christmas, the Shepherd Salama Abu Hashish, 20 years old, died by a shot in the back while he was tending his sheep. Since the beginning of last year, about a hundred workers and farmers have been shot by Israeli snipers in the buffer zone, 13 of them died.