In the early afternoon of 23 January 2011, an armed man killed two animals near the South Hebron Hills village of Maghayir Al-Abeed. Two teenage shepherds reported that they were watering their family’s flock at a well just above their village when a man running through the area, carrying an M-16, fired four or five shots at the dog which accompanies their flock. The shooter proceeded to chase the flock, kicking a ewe and throwing rocks at its head. The dog died immediately from four gunshot wounds and the incapacitated sheep died approximately two hours after the beating.

The two teenage shepherds, Mohammed Mahmoud Mukahmri, 15, and ‘Awli ‘Ali Mukhamri, 13, ascended the hill, following the assailant from a distance, in time to see the man enter the grouping of trees which surrounds Ma’on settlement and Havat Ma’on outpost. They reported the man had a dark brown beard and was wearing black pants, a black shirt, and a yarmulke.

Ninety minutes after the incident, Israeli authorities arrived to investigate the crime scene and take testimonies from those present during the incident.

Hani Salaami Mukhamri, the owner of animals who arrived at the scene mere moments after the shooting, reacted sharply to the police investigator’s doubts that Mukhamri could be certain the assailant that he saw was an Israeli settler, and not an Arab. “Palestinians in this area don’t have guns, never in my life have I seen a Palestinian civilian with a gun. Only settlers have guns here.” Mukhamri also lamented the utter disregard for the lives of his animals, “three lives were lost here today: my shepherding dog, a sheep, and the unborn lamb that the ewe was carrying.”

The well where the shooting took place is a main source of water for the families in Maghayir Al-Abeed . In early 2001, Mukamri’s mother was shot in the leg by an Israeli settler while she drew water from the very same well. 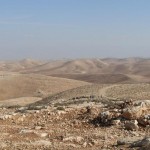 The view from above; people and animals are gathered around the well, where the shooting took place. 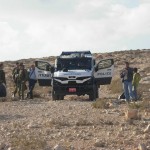 Police, Israeli soldiers, and Israeli border police arrive at the scene. To the left, a policeman in blue clothes questions a young witness. 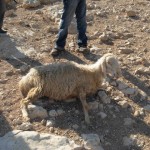 The sheep that was beaten by the armed man. Witnesses said the man kicked the sheep in the stomach and face, and threw rocks on its head. The pregnant sheep was alive when CPTers arrived. 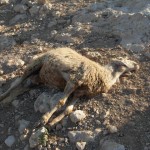 Two hours after the beating, the sheep sheep died. The owner suspected the animal was 10 days from giving birth. 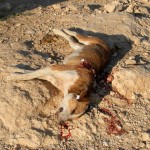 The dog died immediately after suffering four gunshot wounds. The animal was prized by the family for offering protection to the flock of sheep and goats, both out in the fields and in their cave at night.

International peace activists from Christian Peacemaker Teams arrived at the scene after the shooting, taking testimony and photo and video documentation.

Operation Dove and Christian Peacemaker Teams have maintained an international presence in At-Tuwani and South Hebron Hills since 2004.