28 year old Ibrahim Yousef Ghaben from Beit Lahiya in northern Gaza, personifies the trials of life for Palestinians and their families, and the multitude of hardships brought by Israel’s siege and violent attacks. It would not normally have been Ibrahim’s choice to collect rubble with a donkey cart as a means of providing for his sick mother, wife and 8 young children. But in Gaza, external pressures force people to make choices that anywhere else would be deemed beyond reason and perhaps beyond imagination. 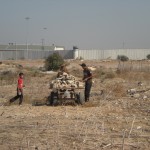 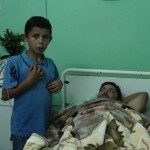 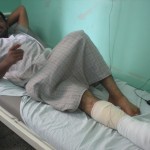 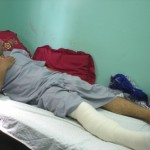 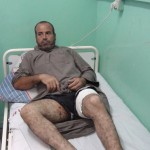 The shooting on the 10th of November was the latest setback for Ibrahim, the most recent of the 10 rock collectors shot near or in the Israeli imposed ‘buffer zone’ during the last 3 weeks. The buffer zone is a 300m wide strip of land that runs along the border from where Israel justifies shooting those who enter, although according to a recent United Nations report people are at risk up to 1500 metres from the border. Ibrahim couldn’t speak because he was in so much pain, as he lay in his hospital bed with his right leg plastered and bolted.

His brother Atif described, “he was shot by Israeli soldiers stationed at a border control tower in his right leg when he was about 600 metres from the fence. Friends put him on a donkey cart and took him to an ambulance. The bones in the lower part of his leg have been shattered, and the doctors think it was a ‘dum dum’ (explode on impact) bullet. He had been collecting rubble for 5 months with his donkey cart in the Beit Hanoun border area.”

Every day hundreds of men and youth collect stones, metal, pieces of concrete and brick in the border areas despite common knowledge that Israeli snipers are at every control tower. They get around 50 shekels for a donkey cart but, like Ibrahim, many of them end up in a hospital bed with a cast wrapped around their bullet wounds.

So why do they do it? The recurring reasons given by scrap and rock-collectors is a complete lack of available work.

Israel’s siege has torn the economy apart and left 67% of the population without jobs. The few imports allowed in are costly and Israel continues to ban all exports from the Strip. The economic value in Gaza of ‘rubble’ has emerged only over the last two years, due to the huge demand for building materials and the very limited supply. Israel allows literally no concrete and building materials to enter the Gaza Strip and although inefficient, recycling the stones and rocks is still cheaper than the small amounts of high priced concrete brought in through the Rafah tunnels from Egypt.

Most of the rubble collectors are based in the North in Beit Hanoun and Beit Lahiya where incursions are frequent, hence the larger number of border side houses and other buildings that have been bulldozed or bombed by the Israeli Occupation Forces. What’s more in Beit Hanoun near the Erez crossing was the site of an industrial centre built by Israel before their forces were redeployed to the border areas in 2005, an area with a high concentration of concrete and stone.

Intensifying the dire need for building material was Israel’s operation: ‘Cast Lead’: the 3 week bombing and land assault over the new year of 2009 that destroyed or damaged beyond repair over 20,000 houses, schools, universities, hospitals, office buildings and mosques. The attack also killed 1400 people including over 400 children; a further 5300 were injured. Ibrahim’s house in Beit Lahiya was destroyed by shelling during the attacks nearly 2 years ago and on Wednesday he became the tenth rock collector in three weeks to be shot collecting rubble.

On Thursday 21st October, we met 23 year old Bassem Gassem and 24 year old and Omar Sabri Hamad who that morning had both been shot in their right foot in Beit Hanoun near to Erez crossing. They were near to the Israeli imposed ‘buffer-zone’.

“There were 50 rock collectors around the area I was shot, without a warning.” Bassem told us. “I was hot and walking so didn’t feel the pain initially, but once I came to the hospital the pain began. He had plied this trade for nearly one and a half years and still can’t see another option once he has recovered. “I used to work the markets with fruit and veg from Erez crossing when it was open but that work dried up. So I began collecting rocks after the war. This is part of life for our families, the siege, the shootings of people guilty of nothing but hard work when there are not jobs. People around the world see the circumstances we have here but they do nothing.”

His mother by his bedside explained the responsibility that was on Bassem’s shoulders: “His father was injured and paralysed during the war. There are 14 family members altogether and he’s the only one providing a regular wage for us. But he’s a strong boy; he’s been working for the family since the 5th grade. I told him not to do this job because of the danger and go back to the markets – but he knows that 30-40 shekels a day is not enough for the family.”

“I will go back there, it’s the only work there for me”, said Bassem

Omar from Beit Hanoun is married with 2 children and the bullet broke bones in his foot, requiring surgery. He will not be going back. “It was my first day collecting rubble, I need the money for my family and there’s no jobs here, no means of providing for my family. A few hundred metres from the control tower at 9am with no warning they shot me in the leg and friends had to carry me out. That’s it for me, I’ll never do that again.”

The other area with numerous border attacks is around Beit Lahiya where Nazmi Salim Tanboura, a 50 year old father of 10 was shot through his thighs at 8:15am on Sunday 31st October. He was approximately 800m from the fence when one bullet went through the back of both of his thighs. “I caught a glimpse of two Israeli soldiers stationed on a small hill. They shot me and I was shouting for my son but he was far away. A friend nearby came and put me on a donkey cart. I was taken to Beit Lahiya corner where an ambulance arrived and took me to the hospital. I’m the only one supporting the family and my sons are all married.”

Like the others, the circumstances around him had left Nazmi with no choice. “There are no jobs, there’s no work. Many people go there despite all the stories of people getting shot. My cousin was shot collecting rocks last month but I didn’t think of stopping. But I’m old now. I’ll buy a new donkey for my cart and try going back to work on the vegetable markets. I don’t depend on people on the outside because we’re always sending messages out but the world doesn’t see us or listen to us. Look how we live! I only have God to turn to here.”

Last Wednesday, as we left Ibrahim in Beit Lahiya hospital, his father was wiping his son’s brow while his 10 year old son stood crying at his bedside. There was a fear as to the ordeal still ahead for Ibrahim’s slow and painful road to recovery. Brother Atif said he and his brothers’ families would take care of him and his children but doesn’t see much hope for Ibrahim to go back to work. “The doctor said his leg is smashed and he’ll be in this condition for 6 months. We don’t know what he’ll be capable of doing in 6 months, or what he has the will to do. Before this he was a farm labourer.”

A cousin Mohammed was not hopeful that the hardships faced due to the Israeli occupation and siege would recede any time soon: “The only thing Ibrahim cared about was earning a wage to provide for his family. If the siege was ended and the concrete and building materials could arrive like in any other country, people like my brother wouldn’t be forced to risk their lives doing this. And the response – bullets while the world watches.”

Atif said that everyone faces danger no matter how they try and live in Gaza: “We have large families in Gaza and we want to work but we’re deprived of our livelihoods, our dignity. Its not just rock collecting. People in the cities are all at risk from bombing, shelling. I’m a University graduate in Psychology, I have no job and I now may work in the Rafah tunnels where there are frequent casualties from Israeli attacks, just to make ends meet.”