The demonstration in the Beit Hanoun Buffer-zone tuesday remembered the brutal Israeli shelling in the area 4 years earlier that killed 20 civilians and injured 60. Palestinians of the Local Initiative group and 4 International Solidarity Movement activists approached the wall at Erez crossing and passed rock collectors in the buffer zone some 100 metres from the border. The next day, Israeli soldiers positioned on observation towers near the crossing fired at the workers, shot 28 year old Ibrahim Yousef Ghaben, 28, in his right leg, breaking his bone and bringing the total number of rock collectors shot by Israeli snipers to 10 in 3 weeks, 7 injured in the Beit Hanoun border area alone.

Once the demonstrators reached the border, chanting and waving flags, they planted a Palestinian flag on the outer wall of the Erez crossing tunnel. Saber Al Za’anin, the General Coordinator of the Local Initiative group spoke of the tragedy that devastated families in the Beit Hanoun area on the 9th of November. “We are here today to ensure that the families, the men, women and children killed, injured and left behind from the massacre on November 2006 are never forgotten, and we will carry on with our struggle to bring justice for these crimes and all of the others that have befallen our people.”

He was referring to one of the most horrific massacres that took place in Gaza’s recent history before Israel’s assault in operation ‘Cast Lead’ during the winter of 2009.

The Israeli operation was called ‘Autumn Clouds’. One day after the Israeli army declared that it had finished the operation in Beit Hanoun after international pressue, 20 people were killed and at least 45 were injured as a large number of shells were fired at the town. Many of the victims were women and children and 11 were from the same Al-A’athamein family. 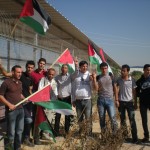 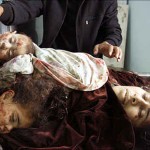 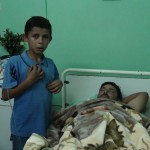 The massacre took place after a siege and street occupation by Israeli ground troops between the 2nd and 8th of November 2006. The soldiers searched house-to-house, arresting, imprisoning and interrogating males over the age of 16 years. Families were forced to stay together in a single room while Israeli soldiers took over floors and rooftops of the buildings, electricity and gas were cut and people often had not access to toilets.

A group of 1500 unarmed women demonstrated during the 7 day siege of the town in an effort to free men gathered in a mosque, only for Israeli troops to open fire on them too. 2 of the women were killed and a further 20 injured, highlighting that however the peaceful the resistance is, the same brutality applies.

Casualties arrived at Al Awda hospital in Jabalya from the beginning of the siege, but delays by soldiers to evacuate them meant some died needlessly, and those that made it to the hospital had no family members to accompany them.

It was the early morning of 9th November, when the 20 civilians were killed as Israeli forces shelled an apartment building which housed around 120 people. Majdi El Athamina lost three brothers and one of his sons, 9 year old Sa’ad – his wife and another son were seriously injured.

Dr Mona El Farra who was receiving the casualties at the Al Awda hospital remembers the horrors that emerged during the week:

“Dina El-Athamina 2 year old toddler, she had bad fractures in the pelvis – there was no father and mother with her because she lost both. The killed and the injured arrived day by day, it was horrific, the hospital was chaos. It was only civilians killed – 7 children and later the army admitted ‘it was a mistake’ Even a rescue worker and a neighbor who went to rescue the family were shot and killed. Ambulances were not allowed into the villages.

I remember one mother was in full labour – noone was allowed in or out of village. After 4 hours waiting to be allowed to leave the village, she left and came to hospital and gave birth. The army was in the village shelling and storming houses, so noone could visit. She returned home with baby in her arms to find her house was demolished. “

People couldn’t imagine the violence increasing but according to Dr Mona after the 2006 bombing, the violence has actually intensified, epitomized by the huge civilian casualties in Cast Lead. “They have no limits, no boundaries for their brutality, no ideas of safety for civilians and health workers. It is a racist, colonial regime that has no respect for international law. We believe that we have our rights and we know that justice is on our side and will one day arrive with the help of the huge solidarity around the world and the growing international boycott, divestment and sanction movement that more and more people of conscience are joining.”

Tuesday’s demonstration ended without incident despite shootings there being a regular occurrence in the previous weeks. For the rock collectors working near to where the protest took place, the perils of occupation continue. An industry only created by the blockade of concrete and the fact 17000 home were so badly damaged, they now turn to this work to help feed their families