Soldiers in front of illegal settlement in Qusin

On Saturday, for the first time in several years, families in the village of Qusin with properties close to the illegal settlements Shave Shomeron and Shave Shomron, were able to spend a few hours harvesting their olives before soldiers forced them to leave.

One of these families has been unable to access their land for the last nine years due to settler attacks and pressure from Israeli soldiers. Another family tried to pick olives about ten days ago but soldiers arrived and stopped them.

According to the Israeli High Court of Justice decision, these farmers have the right to access their land and soldiers must come to protect them. Immediately upon the families’ arrival at their land, however, soldiers confronted them and argued that for the protection of them from settler violence, it was necessary for the farmers to leave.

The families refused to quit and continued their work while international volunteers continued negotiating with the soldiers. After a few minutes the soldiers became impatient with the discussion and left temporarily, giving the farmers a short but appreciated chance to collect their olives: their first chance in many years.

Their excitement was short lived. Four hours later more aggressive soldiers arrived and wouldn’t allow for any discussion. The Palestinians were forced to withdraw from their property. 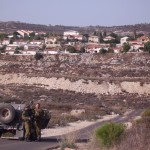 Soldiers in front of illegal settlement in Qusin 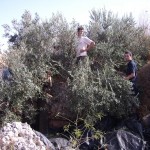 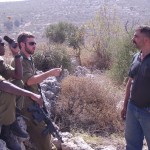