A new military order aimed at preventing infiltration will come into force this week, enabling the deportation of tens of thousands of Palestinians from the West Bank, or their indictment on charges carrying prison terms of up to seven years.

When the order comes into effect, tens of thousands of Palestinians will automatically become criminal offenders liable to be severely punished.

Given the security authorities’ actions over the past decade, the first Palestinians likely to be targeted under the new rules will be those whose ID cards bear home addresses in the Gaza Strip – people born in Gaza and their West Bank-born children – or those born in the West Bank or abroad who for various reasons lost their residency status. Also likely to be targeted are foreign-born spouses of Palestinians.

Until now, Israeli civil courts have occasionally prevented the expulsion of these three groups from the West Bank. The new order, however, puts them under the sole jurisdiction of Israeli military courts.

The new order defines anyone who enters the West Bank illegally as an infiltrator, as well as “a person who is present in the area and does not lawfully hold a permit.” The order takes the original 1969 definition of infiltrator to the extreme, as the term originally applied only to those illegally staying in Israel after having passed through countries then classified as enemy states – Jordan, Egypt, Lebanon and Syria.

The order’s language is both general and ambiguous, stipulating that the term infiltrator will also be applied to Palestinian residents of Jerusalem, citizens of countries with which Israel has friendly ties (such as the United States) and Israeli citizens, whether Arab or Jewish. All this depends on the judgment of Israel Defense Forces commanders in the field.

The new guidelines are expected to clamp down on protests in the West Bank.

The Hamoked Center for the Defense of the Individual was the first Israeli human rights to issue warnings against the order, signed six months ago by then-commander of IDF forces in Judea and Samaria Area Gadi Shamni.

Two weeks ago, Hamoked director Dalia Kerstein sent GOC Central Command Avi Mizrahi a request to delay the order, given “the dramatic change it causes in relation to the human rights of a tremendous number of people.”

According to the provisions, “a person is presumed to be an infiltrator if he is present in the area without a document or permit which attest to his lawful presence in the area without reasonable justification.” Such documentation, it says, must be “issued by the commander of IDF forces in the Judea and Samaria area or someone acting on his behalf.”

The instructions, however, are unclear over whether the permits referred to are those currently in force, or also refer to new permits that military commanders might issue in the future. The provision are also unclear about the status of bearers of West Bank residency cards, and disregards the existence of the Palestinian Authority and the agreements Israel signed with it and the PLO.

The order stipulates that if a commander discovers that an infiltrator has recently entered a given area, he “may order his deportation before 72 hours elapse from the time he is served the written deportation order, provided the infiltrator is deported to the country or area from whence he infiltrated.”

The order also allows for criminal proceedings against suspected infiltrators that could produce sentences of up to seven years. Individuals able to prove that they entered the West Bank legally but without permission to remain there will also be tried, on charges carrying a maximum sentence of three years. (According to current Israeli law, illegal residents typically receive one-year sentences.)

The new provision also allow the IDF commander in the area to require that the infiltrator pay for the cost of his own detention, custody and expulsion, up to a total of NIS 7,500.

Currently, Palestinians need special permits to enter areas near the separation fence, even if their homes are there, and Palestinians have long been barred from the Jordan Valley without special authorization. Until 2009, East Jerusalemites needed permission to enter Area A, territory under full PA control.

The fear that Palestinians with Gaza addresses will be the first to be targeted by this order is based on measures that Israel has taken in recent years to curtail their right to live, work, study or even visit the West Bank. These measures violated the Oslo Accords.

One group expected to be particularly harmed by the new rules are Palestinians who moved to the West Bank under family reunification provisions, which Israel stopped granting for several years.

In 2007, amid a number of Hamoked petitions and as a goodwill gesture to Palestinian President Mahmoud Abbas, tens of thousands of people received Palestinian residency cards. The PA distributed the cards, but Israel had exclusive control over who could receive them. Thousands of Palestinians, however, remained classified as “illegal sojourners,” including many who are not citizens of any other country.

The new order is the latest step by the Israeli government in recent years to require permits that limit the freedom of movement and residency previously conferred by Palestinian ID cards. The new regulations are particularly sweeping, allowing for criminal measures and the mass expulsion of people from their homes.

The IDF Spokesman’s Office said in response, “The amendments to the order on preventing infiltration, signed by GOC Central Command, were issued as part of a series of manifests, orders and appointments in Judea and Samaria, in Hebrew and Arabic as required, and will be posted in the offices of the Civil Administration and military courts’ defense attorneys in Judea and Samaria. The IDF is ready to implement the order, which is not intended to apply to Israelis, but to illegal sojourners in Judea and Samaria.” 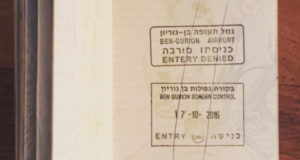 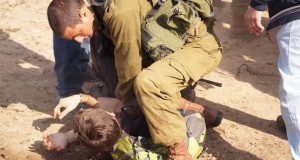