New
Home / Reports / Bethlehem is on fire. Apartheid is burning.

Bethlehem is on fire. Apartheid is burning.

Two months ago there was one weekly demonstration in the Bethlehem area, this weekend alone there were four. With Al-Ma’sara on Friday, Beit Ummar and Jubbet adh Dhib on Saturday and Beit Jala on Sunday, the third -unarmed- intifada is knocking on our door. The Israeli government knows this and is terrified. They can outgun an armed insurgence but their weapons will only erode global support when used against unarmed, non-violent resistance.

New demonstrations seem to be popping up each week with new villages joining the popular struggle against apartheid. ISM activists showed strong support for the popular demonstrations, new and old by joining Palestinians standing in roads, planting trees, and staring down lines of soldiers armed to the teeth. Below is an account of each action. 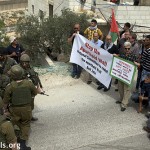 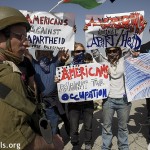 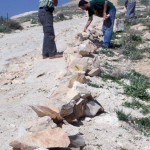 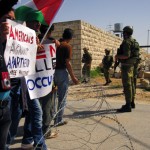 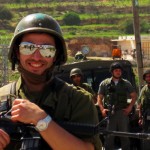 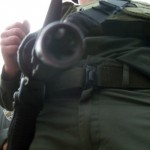 Looking down the barrel of a gun in Beit Jala where protesters sat down in front of a line of Occupation Forces.

Friday 12 March 2010-A group of 50 Palestinians, Israelis and internationals challenged and trampled the barbed-wire blockade erected by Israeli Occupation Force soldiers as the weekly demonstration attempted to reach the future site of the Apartheid Wall which will confiscate 70% of the land from the Al-Ma’sara region. The drum-led demonstration marched through the streets of Al-Ma’sara chanting solidarity slogans, holding signs waving Palestinians flags. Internationals from America, Belgium and Scotland held solidarity signs with the slogans “Americans, Belgians and Scots against the occupation!”

At the IOF erected blockade, speeches, drumming and chanting continued as the barbed-wire was pulled back by demonstrators. This tugging allowed the crowd to pass under the wire, directly confronting the soldiers and getting a few steps closer to the village land. When the Closed Military Zone papers were produced and the an announcement over the loud speakers gave the demonstrators eight minutes to disperse before arrest, the nonviolent group sat down in protest on both sides of the barbed-wire.

After 15 minutes of sitting, the demonstration was called to a close by the Popular Committee and the group left chanting “Shame on you!” to the soldiers supporting the illegal occupation of Palestine.

The sun was shining in full force as a small group of Palestinians, internationals and Israelis walked up a steep hill near the base of Mt. Herodan and towards the isolated Palestinian village of Jubbet adh Dhib. The residents of Jubbet adh Dhib are under constant threat and frequent attack from a cowboy settler outpost just a few hundred meters from their homes. Complete with horses, trucks and off-road vehicles, the settlers create an unsafe living environment for the residents and are a dangerous daily reminder of the illegal Israeli occupation of Palestine.

In a gesture of support and solidarity, the group began a small act of resistance that would create a big statement. One by one, rocks were piled up on the village boarder creating the only barrier between the village and the Zionist cowboy settlers. This is the second time that the small wall, only half a meter tall, was erected. The wall built last weekend was totally destroyed by the settlers, creating fear in the residents and frustration for those carrying huge, heavy stones under the midday sun.

This wall, unlike the Israeli Apartheid Wall, must not fall. Jubbet adh Dhib residents need a physical barrier not just to protect themselves, but also their land from further confiscation by the settlements. Land confiscation and settler attacks are on the rise across the West Bank and the story of Jubbet adh Dhib is unfortunately not unique. So until the settlements are evacuated and Palestine gains its sovereignty, it is small acts such as these that both provide safety and a display of resistance.

Palestinian, Israeli, and international activists sought to repeat last week’s successful demonstration in Beit Ummar, Hebron District by blocking Road 60 leading from Bethlehem to Hebron. On Friday morning, demonstrators made their way from the center of the village to Road 60 where they attempted to block traffic to protest the continued theft of land from Beit Ummar and surrounding villages for the purpose of settlement expansion. Within minutes they were met by Israeli forces throwing sound grenades and tear gas in attempt to disperse the peaceful protest.

Soldiers began using excessive physical force towards both activists and journalists, breaking several cameras. As the activists began to return to the village, the army followed them, continuing to fire tear gas canisters at demonstrators. Of those who remained near Road 60, four were arrested, including Beit Ummar’s National Committee coordinator, Yousef Abu Maria, two Israelis, and an AP journalist. They were released later in the day.

After last week’s demonstration, a curfew was threatened for all of Beit Ummar if protests continued. Later in the week, the same commander led a raid of the home of Palestine Solidarity Project’s coordinators, Mousa Abu Maria and Bekah Wolfe, along with raiding the offices of their newest project, The Center for Freedom and Justice, where office equipment, including a computer and printer, were taken.

The second weekly demonstration against the recent construction of the Apartheid Wall was held Sunday afternoon in the village of Beit Jala. A crowd of 50 gathered at the top of the road leading to the recently bulldozed and leveled playgrounds and olive groves below. The demonstration, led by village residents holding signs of nonviolence, anti-Occupation and peace marched 200 meters before being met by Israeli Occupation Force (IOF) soldiers.

Despite the nonviolent nature of the demonstrators, the IOF responded with heavy force, throwing dozens of sound bombs onto the narrow, heavily populated road. The crowd was quickly dispersed but reassembled with greater determination. Protesters sat on the road, inching the soldiers backwards with their songs, chants and dialogue. Village leaders gave tri-lingual speeches, telling the story of the land, the history of the occupation and their hopes for the future.

After nearly one hour, the Popular Committee called the demonstration to a close. IOF made the provocative choice to drive their vehicles through the crowd, drawing strong emotions and a few rocks. This gave the IOF reason to respond with more violence, shooting tear gas and more sound bombs at demonstrators and village residents.

The fight against the Apartheid Wall in Beit Jala continues with demonstrations and legal battles. Currently, the validity of the land confiscation permit is being challenged in the courts, delaying further construction for a few weeks more.