Despite increased repression, a victory

Legal challenges are an important battle field in non-violent resistance because often the occupation is forced to change their policies when these are held up to scrutiny. Court cases such as the one below as can determine whether or not Israeli occupation forces continue to use a particular oppressive tactic. But legal work is also quite expensive. The ISM is asking its supporters to throw fund-raising events to raise money to support the work of the ISM’s solidarity with the Palestinian movement against apartheid. You can donate by check, or online (via Paypal) see https://palsolidarity.org/donate for details.

On Monday, February 8, 2010, the Israeli Supreme Court ordered the release on bail of the two activists who were arrested on Sunday during a pre-dawn raid on the Ramallah media office of the International Solidarity Movement. Ariadna Jove Marti, a Spanish journalist, and Bridgette Chappell, an Australian student at Beir Zeit university have now been banned from the Occupied Palestinian Territories.

During the hearing for Ariadna and Bridget, the State Prosecutor admitted that it was illegal for the Immigration Police to receive custody of the two in the Occupied Palestinian Territories, where it has no legal authority. The illegality of the detention of Marti and Chappell by the Immigration Police is now undisputed.

According to Marti and Chappell, they were questioned primarily about their overstayed visas. The Army, however, alleges that their arrests were security driven, despite the fact that the State Prosecutor could provide no evidence to support this claim. The judges have ordered the state to file depositions, if any exist, implicating the two as security threats for a review of the legality of their detention.

In response to the accusation that she is a “security risk, Chappell said, “Our ‘weapons’ were not like the ones the Israeli soldiers waved about wildly after barging into our apartment, they were our cameras. These let the world see the violence that the occupiers visit upon the Palestinians and they were quite dangerous to Israel’s institutionalized domination.”

“I hope that our presence makes the ongoing ethnic cleansing of Palestine that much more difficult. In light of the illegal raid that led to our incarceration, it seems that the ‘security’ of the Israeli army means that their injustices are securely hidden from the world,” said Marti.

The Oslo Accords between Israel and the PLO clearly forbid any Israeli incursion into Area A, which includes the major Palestinian cities in the West Bank, for reasons not directly and urgently related to security, even in “hot pursuit.” In practice however the Israeli military continues to exercise full control on the entire West Bank and Gaza Strip. The overall legality of the raid (under Israeli law) remains contested and should be reviewed by the Supreme Court in the continuation of the court case. In the mean time the court has ordered the release of the two on a NIS 3,000 bail each, and on the condition that they will not enter the Occupied Territories pending final decision in the case.

Mohammed Khatib, coordinator of the Popular Struggle Coordination Committee said, “The popular struggle is spreading. More and more Palestinians are turning to nonviolent resistance, the boycott, divestment, and sanctions movement is growing here and internationally and Israeli war criminals are being challenged by courts around the world. These night raids show that Israel has panicked, deluding itself that by arresting Palestinian and international activists it can stop the movement and hide its crimes from the world.” Khatib was also arrested recently in a military raid at his home, and is now free on bail.

The raids are continuing. On Monday, February 8, 2010,Israeli soldiers raided the Ramallah offices of Stop the Wall and the Peoples Party stole computers, media equipment and documents from the office. Jamal Juma, the coordinator of Stop the Wall, a Palestinian campaign at the forefront of the global movement for boycott, divestment and sanctions against Israeli apartheid, and Mohammad Othman, a Stop the Wall activist, were recently released with no charges after being imprisoned by Israeli forces.

Israel is also targeting the International Solidarity Movement (ISM), arresting ISM activists working in support of the popular campaign against the wall. Over the last ten months, the “Oz” immigration unit illegally arrested and attempted to deport four other international activists. Eva Nováková, a Czech national and ISM media coordinator, was arrested in Ramallah on January 11, 2010, and deported the next day, before the deportation could be appealed. She too was arrested by the Immigration Police. Nováková’s lawyer is currently in the process of preparing an appeal to the Israeli Supreme Court to challenge the legality of her arrest. 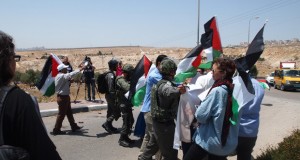 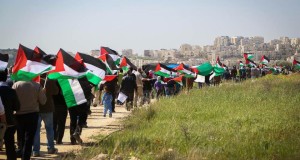 A decade of civil disobedience in my West Bank village 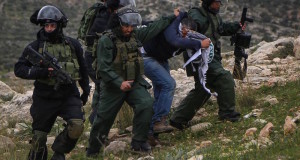