On 21 February 2010 Prime Minister Binyamin Netanyahu announced the Israeli government’s intention to designate as Jewish heritage sites Rachel’s Tomb in Bethlehem and the Ibrahimi Mosque in Hebron. Netanyahu’s statement has led to considerable concern and outrage in the Palestinian community. The Ibrahimi Mosque is one of the most important Muslim sites, and is the one most accessible to West Bank Palestinians. The prospect of these sites becoming closed to Muslim worshipers has been particularly keenly felt in Hebron, where the Ibrahimi Mosque regularly draws large numbers of Muslim worshipers and was the site on 25 February 1994 of the massacre of 29 Muslim worshipers by Dr. Baruch Goldstein, an extremist Jewish settler. 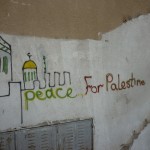 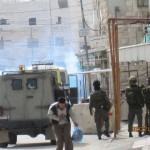 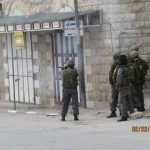 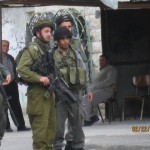 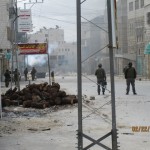 There is international concern too. In a statement, Robert Serry, the UN Special Coordinator for the Middle East peace process, said he was concerned by Israel’s announcement regarding the Hebron holy site. ‘I call on Israel not to take any steps on the ground which undermine trust or could prejudice negotiations, the resumption of which should be the highest shared priority of all who seek peace,’ Serry said.

In protest at Netanyahu’s statement there was a general strike on 22 February 2010 in Hebron, as a result of which most children were not at school. Around 08:30, Palestinian boys made their own response to the statement by throwing stones near the Qitoun checkpoint in the Yatta Road, while other Palestinians threw stones at soldiers between Bab il Baledeyya and Bab iZaweyya. Press reports have suggested that bottles were also thrown, but CPTers saw nothing thrown apart from stones. The Israeli military’s response was to shoot repeated rounds of tear gas at the Palestinians, causing alarm and discomfort to people on the street and in their homes and shops. At Yatta Road a group of small children huddled together as they got into a bus to take them home. In the Bab iZaweyya area (by the H1/H2 border) CPTers Gainey and Nichols observed Palestinian policemen work to move the crowd away. The incident there was over by 10:45. CPTers Chiba and Jack were at the incident near the Qitoun checkpoint, which lasted until 11:30.

On Thursday 25 February 2010 Hebron residents, supported by Israeli and international friends, will mark the anniversary of the mosque massacre with a non-violent demonstration calling for the opening of Shuhada Street to Palestinians. At 05:00 that same day, Hebron residents will worship in the Ibrahimi Mosque in memory of those who died in the massacre.