Palestinian and internationals help plant olive trees in Bilin to replace those destroyed by Israeli troops and settlers.

At 9:30am residents of Bil’in village, Palestinian political representatives, and International activists gathered in Bil’in to plant olive trees and almond seeds for 20 farmers who own land besides Israel’s Apartheid Wall. Approximately 200 trees were planted as part of the ongoing popular resistance to the Israeli apartheid wall and settlements. Bil’in has organized weekly and sometimes daily actions against the wall for the past five years, gaining international attention for the struggle and becoming a symbol for nonviolent, creative, popular struggle around the West Bank of Palestine.

An hour into the planting, an Israeli soldier appeared on the other side of the wall and gave a warning shot.  He stated that planting next to the Wall is forbidden and that people were to stay 10 metres away from the wall. A jeep with four soldiers arrived and stood guard as the people continued planting slightly farther from the wall.

Two years ago the Israeli Supreme Court had deemed the path of the Wall, which cuts through Bil’in’s agricultural land to be illegal. Construction work to reroute the Wall in Bil’in began on February 11th, 2010. Israel has twice been found to be in contempt of court for not implementing the decision sooner. Residents of the village have had permission to access their land on the other side of the wall even before the courts ruling two years ago. Today, farmers planted 80 trees on the other side of the wall. 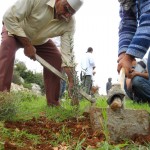 Palestinian and internationals help plant olive trees in Bil’in to replace those destroyed by Israeli troops and settlers. 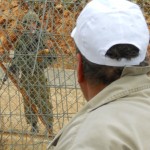 Israeli soldier just after firing at Palestinians and internationals as they planted olive trees on Palestinian land.