Network of road gates tightens its stranglehold on Shufa village

An earth mound at the entrance to Shufa village

The village of Shufa continues to struggle with restricted road access and no electricity grid connection, as a new road gate is established at the entrance to the village.

Israeli Occupation Forces established a new road gate at the entrance to Shufa village one week ago, enabling the military to restrict or forbid access to the village at any given time, by closing the gates. The gates are effectively – or at times a precursor to – a form of road block. A similar gate was constructed 2 days ago in the neighboring village of Seffarin at the intersection of the village’s road with an Israeli road. The increasing number of road gates in the region contribute to  slowly creeping network of apartheid roads and restriction of movement for Palestinians living in the West Bank.

Shufa village has been split in half and isolated by road blocks and apartheid roads. The lower half of the village is about 8km from the city of Tulkarm but villagers cannot drive up the hill to their neighbours, less than 1km away. Earth mounds and concrete blocks stop vehicle access to the short stretch of ‘settlers only’ road, which used to link the two halves of the village.

The section of the village located on the hill was denied all road access for 6 years. Now there is only one road open, on the opposite side to Tulkarm, so that the villagers must now travel 22km through a checkpoint to get to the city 8km away. The blocked roads have been opened for only 3 and a half days in the last 8 years. Severe travel restrictions and delays have caused at least 3 deaths in the village due to refusal of access to Red Crescent ambulances trying to enter/exit Shufa.

The village is not allowed to connect to nearby power lines, forcing residents to run generators for a few hours a day. The system of road blocks have made the transport of supplies to the village incredibly problematic and expensive. Residents fear that even this may be stopped if the army decides to shut the gate on the open road.

A few hundred metres from the village lies the illegal settlement of Avne Hefez. It was originally built in 1985 on land belonging to Shufa. It has since expanded and spawned an outpost. The villagers now have to apply for permission to farm some of their own land. Even with permits they are often refused or scared off. According to residents of Shufa, many of the houses in the settlement appear to be empty or only used for holidays, or ‘part-time settlers’. A small military base is also located inside the settlement.

US Aid has funded a new school in Shufa, which could have been built with local engineers and labour for half the price, and given the local economy a much-needed boost. The new school comes complete with computers, but no electricity to run them. 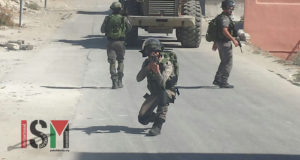