The heavy rain which fell down in the West Bank didn’t prevent the protesters of Ni’lin village from protesting against the Apartheid Wall, the pray held in one of the mosques in the village, after that the demostration went through village streets inviting the people to participate and calling against the polices of the occupation government in taking lands and killing people all over Palestine.

The protesters managed to reach the concrete wall; they brought huge number of the car tires, it is important to mention that the demo started with the slogan of the “Black Wall” the name expressing the bad effect of the wall for the people who lost their lands in Ni’lin and in Palestine in general.

The Protesters burned the tires near the concrete wall, that affected the wall and protesters started seeing cracks and splits in the concrete, during that the occupation forces start shot a huge amount of tear gas at the protesters, some of the people had difficulty breathing, the Red Crescent volunteers helped the people and gave them the treatment.

Ibrahim Ameera the coordinator of Ni’lin village public committee said that, “the public struggle the only way for getting our freedom back, and Ni’lin village is one of these examples, and we will continue the struggle and finding innovative ways to make the wall fall down.”

The clashes started between the stones throwers and the soldiers who managed to shoot the tear gas to the people and to spray the waste water towards the protesters to prevent them from reaching the wall, the youth thrown a bottles with red colors to send a message to the occupation that this is the real color of your jeeps and forces. 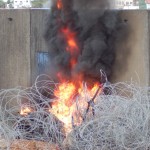 Demonstrators set fire to tires near the Apartheid Wall 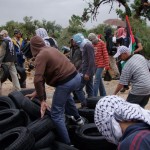 Protesters carry tires to the site of the illegal Wall 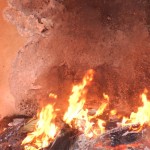 The concrete wall cracks under the heat of the fire