On Monday afternoon from 5pm a large group of protesters put up tents and banners next to and across the road from the Israeli embassy in central London to protest the evictions of 53 Palestinians in Sheik Jarrah on Sunday. Police initially tried to move the protest but the protesters refused to move. Eventually the inspector in charge of Kensington and Chelsea police force arrived and agreed the protesters had every right to protest Israel’s crime of the ethnic cleansing of Palestinians from Occupied East Jerusalem. 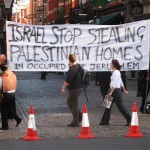 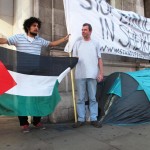 Activists set up tents as a powerful symbol

The protesters erected tents in solidarity with the 9 families who were thrown on to the streets by the occupying Israeli forces to make way for extremist Jewish settlers. The protesters were angry and upset at Israel’s blatant disregard of international law and world opinion in removing the families including 19 children from the ancient Palestinian neighbourhood of Sheikh Jarrah near to old city of Jerusalem that is a fundamental part of a future Palestinian state.

Following condemnation from the British consulate, the US administration, the French government and the United Nations. The protesters have said they will continue pushing the British government and the European Union to follow up their words of condemnation with actions that punish Israel for the ethnic cleansing that it is perpetrating in Occupied East Jerusalem and the West Bank. The determined protesters seriously call into question the favourable EU-Israel trade agreement, the supply of over 150 arms contracts by the British government to Israel and the full diplomatic relations Britain and the EU have with Israel in the light of it’s serious breaches of international law and of the 4th Geneva convention.