At 8pm, around 200 Palestinians, Israelis and international solidarity activists congregated outside the evicted homes of the Hanoun family. Under the presence of the Israeli police, the demonstrators lit candles which illuminated signs and posters condemning the evictions and demanding their homes back. Peacefully, people sang and spoke whilst traffic tooted their horns in support of the families. 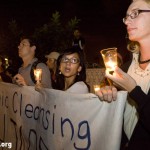 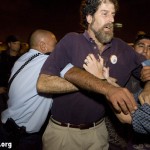 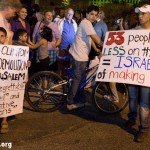 As demonstrators began to march towards the al Gwahi home around 9pm (another home that was evicted and is currently being occupied by settlers), the police violently attacked people walking on the sidewalk, dragging kicking and beating them as they pulled them back along the street towards their vehicles. Police units dressed in all black charged through to lend a hand and eventually forced Arik Asherman of the Rabbis for Human Rights into a police van, which hastily left the scene. When things calmed down, an announcement was made that the peaceful protest was an illegal one and everyone had two minutes to leave the area. Taking that as their cue, the protesters regrouped and once again moved towards the home of the Al Ghawi family where they were met with a police blockade. The vigil continued with two groups in separate spaces on the streets with the space in between occupied by settler youth mixing with the police and border police.

As settlers exited their settlement through the groups people jeered and whistled but the candle lit peacefulness prevailed, despite the best efforts of the police. Eventually the banners, posters and protesters made their way back to the space outside on the street where the families are now living and are joined overnight by friends, family and international support.