The Youth Against Settlements group, with participation from international and Israeli solidarity activists, organized a protest in Bwaireh north east of Hebron on Friday. The protesters built a small booth in response to the recent construction of a settler outpost. A month ago, local settlers created a structure to de facto annex Palestinian land with a colonial outpost in the area.

The Israeli settlers trespassed on to the Palestinian land owned by Issa Abu Karsh Jaber a month ago and built an illegal structure. Israeli army and police, who were present, did not interfere despite the illegality of the structure. 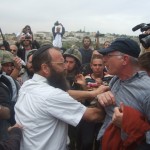 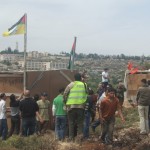 Demonstrators create structure as a protest 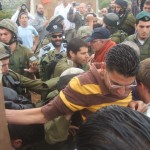 Palestinians resist confiscation of their land

Israeli forces arrived to the place of the protest to protect the settlers who began attacking the protesters and their booth violently, under the leadership of their fundamentalist leader Baroukh Marzel, using stones, tools, and fire lit cloths causing many injuries to the Palestinians and solidarity activists.

The Israeli army proceeded to arrest 8 activists and the Palestinian Wael Azaatari. Then, a Closed Military Zone was declared, and the demonstrators were forcefully removed from the sight while the settlers remained.

The spokesperson of the Youth Against Settlements group said that “the carelessness towards settlers’ violations on Palestinian lands is dangerous and is a major cause for land loss and confiscation, the settlers ambitions should be countered immediately and any slowness will cost the Palestinians high price of property loss and settlers’ attacks and violence.”