On Saturday, May 9th, farmers from Beit Ommar with lands in Saffa, close to the illegal Israeli settlement of Beit Ayn, were prevented from working their fields after Israeli forces declared the area a closed military zone.  At around 9am, about six farmers and their families went to their lands accompanied by a dozen Israeli and international solidarity activists.  After they were only in the fields for about ten minutes, a jeep of Israeli border police arrived.  The police used a bullhorn to declare the lands a closed military zone and all of the farmers and solidarity activists were ordered to leave. 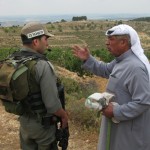 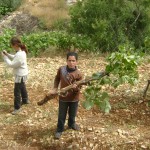 Villagers ordered off their lands 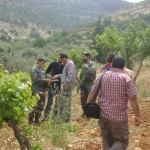 The farmers initially ignored the order and continued to work their lands.  Three more jeeps with soldiers and border police arrived, and the soldiers approached the farmers in the fields.  Israeli forces displayed an order from a military court that designated the lands off limits to their Palestinian owners.  The farmers then decided to leave their fields and return to the village.  As the farmers were leaving, several dozen Israeli settlers, most of them children, gathered at the top of the hill and repeatedly chanted, “death to all Arabs.”  One settler was heard shouting, “I will go get a basket for your head,” in an apparent threat against one of the farmers.

For the past month and a half, the Israeli military has repeatedly declared village farmland close to the settlement to be a closed military zone.  In addition to harassment from Israeli forces, the Palestinian farmers also face settler violence on these lands.  On the April 26th, two elderly Palestinian farmers from Beit Ommar were beaten by thirty masked settlers on the farmers’ agricultural fields close to the settlement.  Abdullah Soleiby, aged 80, sustained two hair-line fractures and received ten stitches to the top of his head after three settlers held him down and repeatedly smashed his head with stones.