On the morning of the 16th, Palestinian farmers from Beit Ommar village with lands in Saffa close to the illegal Israeli settlement of Bet Ayn, defied a closed military zone order issued by the army in order to work their lands. At around 7am, about a dozen farmers and their families accompanied by a large group of Israeli and international solidarity activists, went to their fields in a valley just below Bet Ayn settlement. Farming in this valley is often dangerous, as the villagers face harassment from settlers and the Israeli military.

The farmers picked grape leaves and used tractors to work the fields for about three hours before settlers started to gather at the top of the hill screaming, “death to all arabs.” Within minutes, a jeep of Israeli soldiers and border police arrived and showed a paper declaring the lands a closed military zone. An Israeli solidarity activist countered the order by showing the commander a copy of a ruling from the Israeli high court that states that it is illegal for the army to repeatedly declare closed military zones and deny farmers access to their lands. The commander ignored the court paper and told the farmers and solidarity activists to leave the lands before returning to his jeep. However, the farmers continued to work their lands in the area for about another hour before finishing with their work without interference from the army. 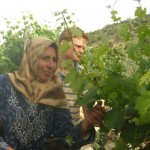 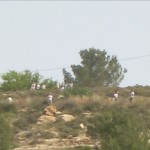 Israeli settlers gather at the top of the hill 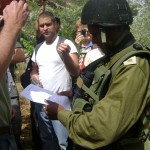 On the morning of the 17th, two elderly Palestinian farmers returned to the valley accompanied by four international solidarity activists. In an unusual occurrence, the farmers were able to pick grape leaves for several hours without any threats from settlers or the army even appearing to prevent them from working.

On the morning of the 18th, farmers from Saffa attempted to work their lands at the top of the hill overlooking the valley, closer to the illegal Israeli settlement of Gush Etzion. Shortly after the farmers arrived, three settlers appeared and began to walk towards the Palestinian villagers shouting threats and telling them to leave the area. Fearing for their safety, the farmers returned to the village. However, they returned to the same area in the evening at around 4pm. This time, the farmers went out in a large group with women and children and they were also accompanied by four international solidarity activists. After about an hour of working the lands, two Israeli soldiers came down the hill from the settlement and declared a closed military zone. Yet the soldiers lacked the military order that makes the closed area official. After farmers and internationals told the soldiers that the closed military zone was not legal, the soldiers retreated to the top of the hill and watched the farmers until they finished their work about an hour later.