The lentils did ok today

Today we accompanied farmers in the Latamat area on the outskirts of Khoza’a. The last time we were out farming in Khoza’a the shooting was the closest I’d experienced, and from the video footage it looked like the Israelis were aiming to shoot my college J in the leg. Since later that same day Wafa was shot in the kneecap, and not too long before that farmer Mohammed was shot in the foot while we were with him, the ISM group had been taking stock of our role. We decided that Gaza ISM had to hold meetings with any farmers that wanted our accompaniment and be absolutely sure they understood that our presence protects them only mildly if in fact it protects them at all. 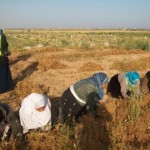 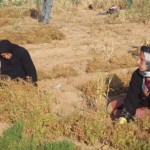 An anxious eye on the border 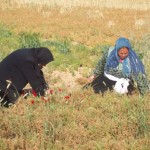 …and picking as quickly as possible 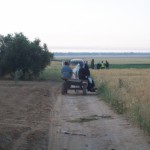 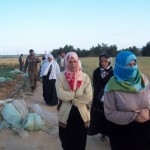 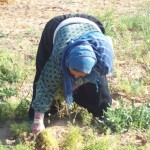 My personal feeling was that as long as they are clear on that, then if they still want us we should still go, but then I have to leave Gaza soon. In the Khoza’a meeting (this included showing our video footage of the Faraheen shooting of Mohammed and telling them about Tristan’s shooting and the past killings of ISMers) the farmers replied “Ok, maybe they shoot at us when you are with us, well we’re used to that because they shoot at us when you are not with us. So it’s normal. But if you are with us when it happens – at least you can tell the world about it.”

So we met the mostly women farmers at 7am (often women work the most dangerous areas in the hope the soldiers will shoot less) and walked to the fields which were about 4-500 metres from the border. Today’s crop was lentils. I have never seen a lentil plant before, and I certainly hope no-one has to shell the lentils individually cos that would really be some job.

The farmers told us they had been shot at the day before in this same field. Several of us had had bad dreams the night before, and I’d written a quick will with various keepsakes for Gaza friends. In the van, E and I exchanged computer passwords and emergency contact numbers. (Actually, I’ve noticed her looking speculatively at me sometimes, since I told her she gets my laptop if something happens to me here.) She also informed me that for her martyr poster if she died, she wanted a picture of her with a donkey. So it was with somewhat of a sense of doom we walked down the track among golden wheatfields. And when explosions started shaking the ground, we wondered if we should even keep going. We rang our friend J in Faraheen, since they seemed to be coming from his direction.

But he told us that actually what we could hear was a fight between Palestinian resistance, and Israeli occupation forces, in Maghazi camp (where Dr Halid – who is a nurse not a doctor – and his family live) which was a lot further north. So the lentil picking got underway and we tried to feel reassured by the fact that the F16s and Apaches flying overhead, and the distant roaring, were not directed at us. But I couldn’t help imagining what it must be like to be a resistance fighter on the ground facing those Apaches and F16s.

Anyway, it wasn’t long before two jeeps turned up at the border, and Israeli soldiers got out. We waited for the inevitable, and it came – a short burst of shooting only broadly in our general direction. The women working on the ground tensed up and waited. But that turned out to be it. The soldiers got back in the jeeps, and the jeeps drove off again. Some hours later, lots of lentils were picked, the sun was high, everyone was relaxed, and the morning was a success. You can see my colleage G’s Youtube footage of the brief shooting, which he has cheekily finished with a minute or two of me and E entertaining ourselves with some of the dubke dance steps we’ve learnt. You can also find a report of the day and archived articles and videos at the new blog Gaza ISMers have created to support the campaign to protect Gaza farmers, at http://farmingunderfire.blogspot.com/. Please tell your friends.

Later we heard that in Maghazi camp, two fighters were killed, 2 injured, and an Israeli soldier was injured and an Israeli jeep destroyed. I texted Dr Halid and asked how the little girls were. “My children are used to bombing now”, he replied resignedly. I can’t help but feel like the resistance fighters took the fire for us today. If Israel hadn’t been busy shooting at them, from past experience it seems a sure thing they would have stuck round to shoot at us, like they had at the same farmers in the same place the day before. I guess that’s why the resistance is called the resistance.

Later that afternoon, V and I were sitting smoking shisha, looking out at the sea, and gunfire got our attention again. Squinting, we spotted another Israeli gunship, tormenting another Palestinian fishing boat. The gunboat alternated tightly circling the fishing boat with drive-by shooting; we could see the spray as the bullets hit the water. It reminded me of nothing more than a cat playing with a mouse. This was still going on several hours later when we left.

Today, E heard that yesterday a woman she visited in Al Shifa hospital, Ghada, the 21 year old mum of two little girls, finally died in an Egyptian hospital of her horrendous white phosphorous burns. Before she was sent out to Egypt she gave her testimony to my friend M, one of the Al Quds Red Crescent workers, and it is posted here on the B’T Selem website. Please read it. It’s the least we can do.

Oh…and Israel dropped its internal investigation into possible war crimes by the Israeli army in the Dec/Jan attacks.