At mid day on the 4th of April, around forty Palestinians from Halhul and the surrounding villages set off to cultivate land near the illegal settlement of Karmi Zur.  Halhul is a village in the Hebron district of the southern West Bank.  Demonstrators were also joined by Israeli and international solidarity activists.

The protestors headed up the road to the fields around that village that have restricted access to Palestinian farmers.  The Israeli military restricts these lands due to their proximity to the illegal Israeli settlement of Karme Zur.  These fields are also dangerous for Palestinian farmers to cultivate because of attacks and harrassment fom settlers.

Soldiers in two jeeps arrived and escorted the demonstators up the road as settlers came to the security fence around Karme Zur.  The soldiers then stopped the protestors from continuing any further but one Palestinian farmer headed out to his fields and started cultivating his land.  The crowd followed, helping the famer to clear rocks, dig the soil and plant crops. There was singing and a festive atmosphere to the crowd as a dozen soldiers lined up between the protestors and the settlement and made a failed attempt to detain a Palestinian man. 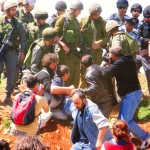 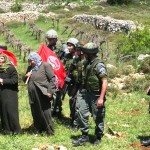 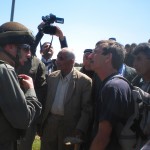 Thirty minutes later, around 30 more soldiers and border police arrived and issued an order declaring the area a closed military zone, demanding that everyone leave the land.  Israeli forces then began to break up the demonstration. The army began to push people off the land, using sound grenades to disperse the crowd.  The demonstrators attempted to hold their ground, and two Israeli activists were arrested.

Throughout Palestine for the past week, people have been commemorating Land Day. The protest in Halhul is amongst the last of around 50 such markings across Palestine.  Land Day marks the date of the Palestinian demonstration that occurred in the Galilee in 1976 against the planned confiscation of around 21,000 dunams (21km) of land from Palestinian farmers in Israel and the subsequent assault by Israeli forces on the demonstrators that resulted in 6 Palestinian deaths, 96 people injured and 300 arrests.