An elderly man saw me walking the other morning. “Bless you, bless you,” he said, holding out his palm as I gave him 20 shekels.

What has rendered a man in his late years impoverished and begging, in a manner Palestinians are not accustomed to?

I followed him home yesterday. It took some doing, as the name he had told me, while correct, didn’t seem to register with his wife when my friend Mohammed called. Establishing that he was the same man I’d met on the street took some time two days ago. Then locating his home in a swirl of alleys after the Sahaa market area took more doing.

But we finally reached it and I saw the same beaming older man, greeting us with the same enthusiasm and gratitude of two weeks ago.

Mohammad Ahmad Kahawish lives in the Tuffahh area, a neighbourhood in Gaza city’s older area. His family is unusually small for a Palestinian family, with only 3 children. His house is also small, and now is quite damaged from the intense shelling during Israel’s 3 weeks of attacks on Gaza.

“The house jumped from side to side with every missile,” his wife explained.

He’s fortunate that none of the missile hit his home, but suffers nonetheless from a combination of debilitating factors, including at least a natural one: age. He is nearly 70, born in 1940 in Jaffa, in the former Palestine. 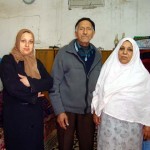 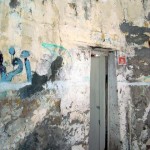 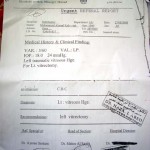 Mohammad’s medical report and referral for surgery outside of Gaza

Until Mohammad fell off of his bicycle 6 months ago, injuring his lower left leg, he had worked as a cleaner, on the street, in homes, wherever he could get work. Post-accident, his doctor strongly advised him not to walk excessively, though out of necessity he’s had to ignore this. When I met him, he was walking in the other end of town, by the marina, collecting sellable bits of rubbish and imploring passersby for some token shekels.

Out of work, injured, and also blind in one eye -[he has a cataract in the left eye (Left traumatic vitreous hemorrhage) which he cannot get treatment for in Gaza. Despite having a referral for surgery in Israel he has yet been denied an exit permit by Israeli authorities]-Mohammad has his family to provide for, and now a house to try to repair.

The reverberations for the bombing around his home caused cracks all along where walls meet ceiling. Some of the cracks are a couple of inches deep, wall torn from roof. Cold air and rainwater stream in. The entire ceiling leaks, there isn’t a dry corner in the tiny 2.5 room and a kitchen home. One room, where his daughters sleep, has no actual roof: the ceiling, a layer of overlapping planks of plywood, is all that shelters from the elements.

Mohammad’s son is 34 but doesn’t contribute to the family income. “He’s got psychosis,” the parents explain. “And at night he cannot see at all.” In 1987, during the 1st Intifada, Israeli soldiers had come to the house and beat the boy, around 12 or 13 at the time.

My original query, how did this dignified elderly man end up so, begging and grateful for the smallest scrap, was answered yesterday.