Tristan Anderson, a 38 year old American citizen, was critically injured during a demonstration in the village of Ni’lin after being shot in the head with a tear-gas canister from Israeli forces. Being unable to visit Tristan in the hospital in Tel Aviv, Ni’lin villagers decided to dedicate the demonstration on the 20th of March in solidarity with Tristan and in protest against the continued violence of the occupation. 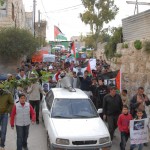 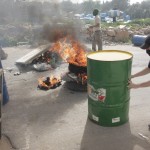 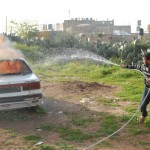 A car catches fire from a tear gas canister during the demonstration.

After the Friday prayer the villagers marched in large numbers towards the town center chanting against the occupation and in support of Tristan. Several posters with pictures of Tristan was used in the demonstration, demanding engagement with the international community and protesting the violence of the occupation. From the town center the demonstrators continued on the main street towards the entrance of the village where the Israeli army were guarding roadblocks. The demonstration then stopped a safe distance away from the roadblock, since people had spotted the army preparing their weapons, and turned instead towards the construction ground of the wall around the village. Soon thereafter, the army started shooting rounds of tear gas, rubber coated steel bullets and 0.22 live ammunition.

During the demonstration, one Swedish solidarity activists was lightly injured by ammunition hitting her jaw. The army also went further into the village, occupying a house by the main road from where they shot at demonstrators in the streets. Two army jeeps attempted to enter the town next to the occupied house but were prevented from doing so by roadblocks built by protesters. On one occasion, soldiers deliberately torched a car by shooting tear gas canisters into it while standing in a family’s garden.

At this week’s demonstration, no extended range tear gas canisters, the type that have injured Tristan and numerous villagers, were used. The demonstration also ended with a low number of injuries, in contrast to previous weeks.

Four residents of Ni’lin have been killed since August 2008 during these weekly demonstrations, and hundreds injured. Currently, Tristan has been taken to the neurological department and is in intensive care. He continues to be listed in critical condition.