On the second day of the Israeli massacres of Gaza, Dec. 29, several homes were invaded by the Israeli Army in the town of Madama, east of Nablus. Four men were arrested and homes were damaged in an invasion unusual in the number of arrestees taken from the town. None of the men has since been released, and none have been officially charged with a crime. 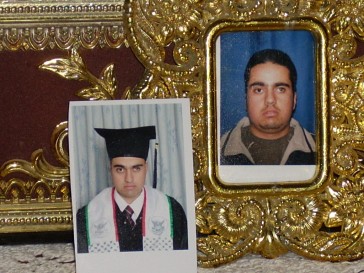 The town of Madama is located approximately 4 kilometers south of Nablus, and is subjected to almost nightly invasions – however the arrest of four men at once is a rare occurence. The town is surrounded on two sides by the aggressive Israeli settlements of Bracha and Yitzar.

At 1am on December 29, the Israeli Army invaded the town. They broke down the doors of the family of Na’im Mohammad Nassar immediately, arresting his 24-year-old son Kamal, who is currently studying in Nablus to become a nurse. Soldiers broke a window of the home, rounded up the family of nine, including a 3-month-old baby, and forced them to stay outside in the cold as the army searched the home. Soldiers grabbed the throat of Kamal’s 14-year-old brother and father, choking them as they threw them outside. The family reports still feeling afraid every evening. Kamal’s mother tried to speak with the soldiers, but was insulted and rebuffed. Soldiers shouted ‘Shut your mouth!’ to her upon being approached in any way. They said nothing about why Kamal was being taken. This same family lost a son two years ago who was very ill and who was held at Huwarra checkpoint for two hours as Israeli soldiers refused to allow him to pass through to the hospital. He died waiting to be let through.

At 1:30am, soldiers broke into the home of Omar Abd-Alkarem Nassar, and arrested his 20-year-old son Yasar. They also threatened to arrest his 13-year-old brother. 7 people were held outside of the home for 1.5 hours. When Omar Abd-Alkarem Nassar asked them “Why are you here?”, the soldiers answered “You have nothing – this is our land and we can come here whenever we want.”

The army invaded the home of the Jebir Ahman Massar family at 2am, and arrested 20-year-old Mohammad, who is also studying to be a nurse. The family was again kept outside in cold weather for 1.5 hours without toilet facilities and without being allowed to collect blankets for the children. One 2-year-old boy who was kept outside contracted a cold. Soldiers ransacked their house, dumping belongings on the floors of every room. Soldiers also asked the father, Jebir, for Mohammad’s mobile phone. When he refused to hand it over, they threatened to shoot him.

19-year-old Mohammad Zahirhseen Qut was also arrested – a student in psychology at Al-Quds Open University in Nablus. Neighbours and friends report that soldiers stole jewelery and 500 Jordanian dinars in cash from his home. Also, soldiers invaded the Yamen Cultural and Social Centre, a gathering place for youth in the community. They took the computer from the centre, as well as broke the lock on the door, and threw books and other educational materials onto the floor.

All these families are waiting for their sons to be returned and have heard nothing from them since they were taken by the Israeli military.