At around 9pm on the 31st December, Mohammed Al-Khawaje died as a result of severe brain damage following being shot in the forehead the previous Sunday.

At 10:30, his body was taken from the hospital in Ramallah in a funeral procession to Ni’lin attended by around 2,500 people. During this time, soldiers were shooting tear-gas in the town to welcome the procession.

At 11:30, his body was taken to his family home in Upper Ni’lin in order for the women of the family to pay their last respects. He was then taken out of the ambulance at the army checkpoint at the entrance to Ni’lin to be taken to the mosque in the centre of the town. There were around 50 soldiers and border police waiting for the procession on hills around the checkpoint, and also occupying the roof of a family’s home. They used sound grenades and shot tear gas a few metres from the body hitting a man and breaking his leg. They then took Mohammed’s body to the mosque where the people of Ni’lin prayed for him. He was then buried in front of the medical clinic beside the body of Arafat Al-Khawaja who was killed on the same day as Mohamed was shot.

After speeches from members of the Popular Committee and political parties at around 2pm, 150 people demonstrated on the road close to the checkpoint where the soldiers had closed the town. This continued until 5pm.

The army fired many teargas cannisters at the peaceful demonstrators, setting fire to a family’s home destroying the interior of the living room. The cannister broke through a window and set fire to the sofas. Due to the fast reaction of the towns people, the fire was contained and spared the 10 inhabitants, which included a baby. 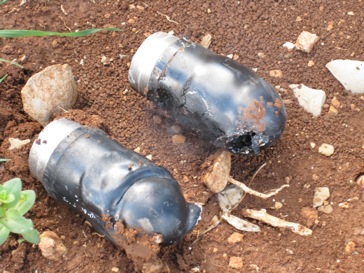 Today the Israeli army used a new type of tear-gas cannister which contains tear gas and also incendiary material. Although it is about 5 times as heavy as the regular cannister, it has a range of 400m which is around 4 times further than the previous ones. They are rubber coated in order to bounce more. When they are fired there is very little sound and as they only release gas upon impact, they are very difficult to follow.

As witnessed before, Israel are testing new weapons designed to maim rather than disperse, using Palestinians as targets.