New
Home / Journals / In the Shadow of Gaza

In the Shadow of Gaza

While the world watches in horror as the death toll in Gaza continues to rise, in the occupied West Bank, the Israeli army is taking the opportunity to unleash a level of deadly force, in the knowledge that, under the shadow cast by their war on Gaza, these atrocities will go unseen by the international community. 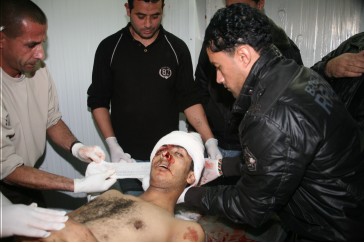 Palestinian communities in the West Bank have responded to the war on Gaza with daily demonstrations in cities and villages throughout the region. Taking the form of marches, sit-ins and candlelight vigils, as well as stone-throwing by young boys, these demonstrations have met with lethal repression from Israeli soldiers in their role as an occupying army. 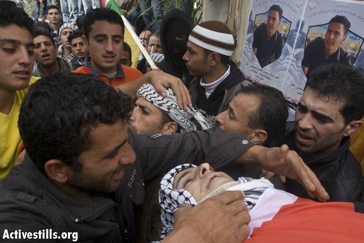 In the village of Ni’lin, West of Ramallah, two young men, Arafat Al-Khawaje and Mohammad Al-Khawaje were both brutally murdered in a spray of live ammunition from Israeli soldiers during a demonstration against the war on Gaza. Arafat, aged 22, was killed immediately as a bullet cut through his back, stopping his heart. Mohammad, who was shot in the head, held-on in Ramallah hospital in a critical condition for four days, before dying on the evening of Wednesday 31st December. A third young man, Mohammad Sror, was shot in the leg. International eye-witnesses to the slaughter describe the attack as being “callous and calculated”, with Israeli soldiers feigning an invasion of the village to lure the young men into the olive groves, where they had concealed themselves, before opening fire from a distance of just 15 metres.

The attack took place with full knowledge that there was no ambulance in the village, as Israeli forces had refused to permit it to pass through the checkpoint. Once the shooting occurred, the ambulance was detained for a further five minutes at the checkpoint, before the soldiers allowed it to enter the village.

In the village of Silwad, another young man, 17 year old Mohammad Hamid, was shot by Israeli soldiers from a guard-tower whilst at a demonstration – dying in hospital from three gunshot wounds to the chest and abdomen.

On 4th January, in Qalqiliya city, another young man was assassinated by Israeli soldiers for throwing stones over the Apartheid Wall that surrounds the city. Mofed Saleh Walwil, 20 years old, was killed with a single sniper bullet to the forehead, when an Israeli jeep opened fire on the boys.

Two more young men are in a critical condition after also being shot by Israeli soldiers whilst demonstrating against Israel’s “Operation Cast Lead”. Hammam Al-Ashari, 17 years old, from Abu Dis, near Jerusalem, was shot in the head with three rubber-coated steel bullets at close range, while he was walking up a stairwell with friends. For 30 minutes, the soldiers prevented a waiting ambulance from reaching Hammam, significantly worsening his condition.

17 year old Mohammad Jaber is also in a critical condition after Israeli soldiers again opened fire on a Gaza protest in Hebron, on Sunday 28th December, shooting him in the head. In the period of two days from 28th-29th December, Israeli soldiers in Hebron wounded at least 21 demonstrators with live ammunition, according to doctors at Hebron’s al-Ahli hospital. International human rights workers living in the area, describe this as a significant “escalation in the violence used by the Israeli Occupation Forces”.

The number of Palestinian youth shot by Israeli armed forces in the West Bank continues to rise, with at least 3 more young men injured by live fire from Friday 2nd to Sunday 4th December.

Severe repression has also been leveled at Gaza demonstrations in the form of arbitrary mass arrests. In East Jerusalem 90 people were arrested for taking part in a non-violent street march. Protesters were all released upon the condition that they not enter Jerusalem’s old city for ten days, despite the fact that many of the arrestees reside there. Many Palestinians living in East Jerusalem now express fear of taking part in non-violent demonstrations, saying that the consequences for such acts are too high.

Suppression of public dissent seems to be the motivation behind many of the repressive tactics being executed by Israeli Authorities. This is exemplified by the denial of entry to Al-Aqsa mosque in Jerusalem’s old city on Friday 2nd January for any men under the age of 50 years, under the pretext that the first Friday prayers since the air strikes on Gaza began would foment further protests. Further, Thursday 1st January saw Israeli Defense Minister Ehud Barak momentarily invoke of curfew across the entire West Bank for Friday 2nd; later downgraded to a closure of all checkpoints between the West Bank and Israel, including East Jerusalem.

In light of the violence and repression being leveled at Palestinians in the West Bank, claims made by Israeli military spokespeople – that they are attacking Gaza in order to put an end to rocket fire – ring hollow. As Israeli authorities protest that their massacre in the Gaza Strip is self-defensive, and that the civilian casualties are an unfortunate by-product of Hamas members “hiding” amongst the civilian population; as they proffer their occupation of the West Bank as an example of their even-handed, democratic restraint in the terrain of Palestinian Authority governance (“There are no rockets fired from the West Bank, so we don’t need to attack them”); the realities on the ground paint a very different picture.

As the Israeli government continues their brutal occupation of the West Bank – killing and injuring youths; firing tear gas in to Palestinian civilian homes (leading to a house fire in the village of Ni’lin on Thursday 1st January); continued invasions of cities and villages, involving curfews, house occupations and arbitrary arrests; the continued imprisonment of some 11000 Palestinian political prisoners – including 327 children; and continuing settlement expansion and settler violence – claims that Israel is not targeting Palestinians as a people are increasingly difficult to believe.

Amidst the barrage of rehearsed Israeli government rhetoric, Palestinian civilians are being killed by Israeli soldiers, in greater or lesser numbers, regardless of where they live, or what their political affiliations. In the occupied West Bank, Palestinian youths will continue to die under the shadow of Gaza, as Israeli forces act with impunity – immune to the international gaze and any potential censure that may accompany it.