On Thursday 4th December 2008 Um Kamel accompanied by Israeli, Palestinian and International activists returned to her original home of her parents in the Talbyieh area in West Jerusalem, where they symbolically set up a tent and demanded the right of return for all Palestinian refugees. 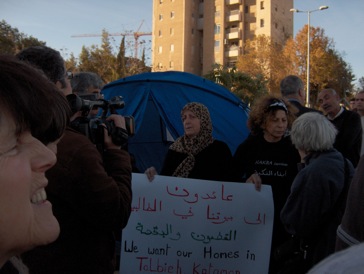 Around thirty activists and supporters of Um-Kamel Al-Kurd marched through the Talbyieh area of West Jerusalem and constructed a tent on a roundabout. Um-Kamil and her supporters issued their demand for the right of return of all refugees with banners and placards that they displayed to passing traffic. The demonstration lasted for an hour under scrutiny from the police and although several motorists shouted insults at the group the demonstration was peaceful and ended after an hour when the activists dismantled the tent and left the area. 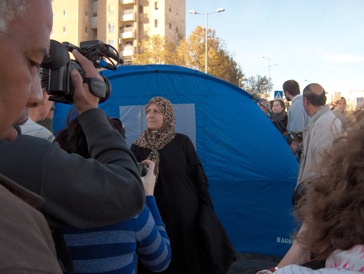 The Al-Kurd family were survivors of the Nakba of 1948 where they, along with 750 000 others were made refugees from their homes of which Palestinians had been living for generations. The Al-Kurd family had been living in housing created for Refugees by the Jordanian government and UNWRA in 1956 in Sheikh Jarrah, before on the 9th of November 2008 they were evicted by Israeli police after a seven year dispute with settlers who had occupied half of their house. Israel supported the settlers’ action although it was illegal under UN resolutions 242 and 338 that call for Israel to withdraw from the territories occupied including East Jerusalem in the 1967 War. Since Um-Kamil was evicted from her home in the refugee housing her supporters demand that she should be allowed to return to her original home. 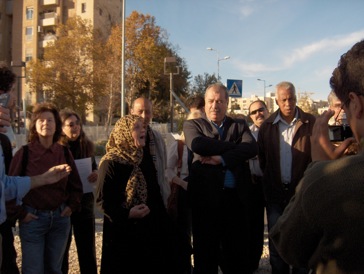 All Palestinian refugees have the right to return under UN resolution 194 that Israel has refused to comply with for 60 years. The actions taken by the Israeli government in settlement expansion and house demolitions in Jerusalem show that their illegal annexation of Jerusalem does not extend the same rights that Israelis have to the citizens in the occupied territories.