At 6pm on the 29th December, another demonstration of solidarity with Gaza people took place in Jerusalem. 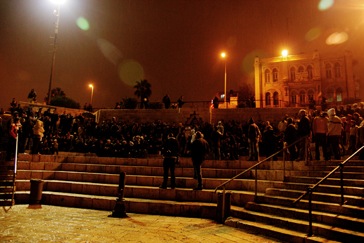 The demonstration to support the people in Gaza took place at 6 o’clock, starting at Damascus Gate and continuing into the old city of Jerusalem. Around 150 people joined the demonstration which was calm and non violent. People marched and chanted slogans of solidarity. The demonstration lasted for about one hour, watched by a very large number of border police who were surrounding the demonstration. 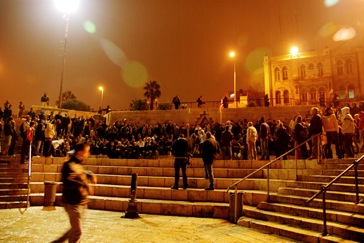 After 30 min of demonstration, without any apparent reason Israeli Police prevented access through the gate and surrounded the protesters. One women wanted to leave the demonstration, but the police forcefully blocked her. 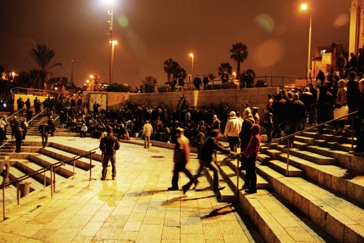 However,during the night of 29th December, ninety people that participated in this demonstration were arrested by Israeli police. They now cannot be inside the Old City for ten days. If they do enter, they will have to pay 2000 to 5000 NIS.

On the 29th of December, Naser Jamjoum (42), one of the participants in the non-violent demonstration the 28th December in East Jerusalem, was arrested around 2.15pm. The Israeli police accused him of ”leading the demonstration”. He was released today (30th December) at around 7pm with conditions of not being allowed to enter the Old City.