Demonstration against Homesh settlement: “These settlers have completely changed our landscape”

A group of 50 Palestinians from the village of Burqa in the North of Nablus, joined by solidarity activists and members of the press, held their weekly demonstration demanding the return of Palestinian land from the evacuated illegal Homesh settlement on Friday. 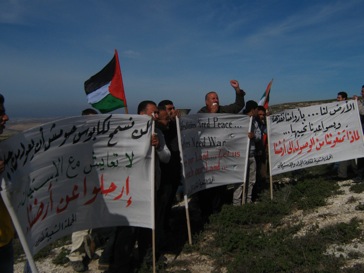 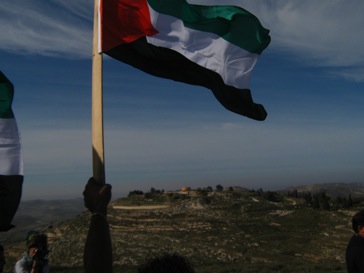 The Homesh settlement was abandoned in 2005 following the terms of the “disengagement” plan, though settlers have attempted to repopulate the land multiple times since and none of the land has been returned to its rightful Palestinian owners. Israeli authorities claim that the area, after the evacuation, is to be considered Area C according to the Oslo agreements, though the logic behind such a claim is clearly lacking. The goal of today’s demonstration was not to reach the settlement itself, though villagers reported having seen Israeli settlers on the abandoned land from the location of the manifestation, confirming worries that settlers were once again attempting to repopulate the land. 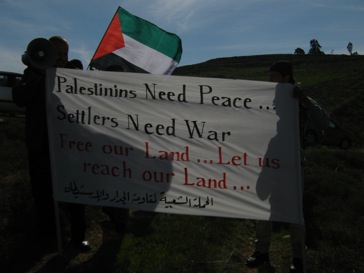 Today’s demonstration was instead focusing on the extreme loss of land around the settlement, dunams where Palestinians used to grow olives, apples, apricots and walnuts. After the evacuation many of the Burqa, Sebastiya, Beit Imreen, Talluza, Deir Sharaf and Silat adh Dhahr residents returned to their long neglected lands to replant, though much of their work has already been reversed when settlers have come to uproot and burn the newly planted trees. In addition many of the farmers’ storage areas and wells have been sabotaged or damaged by settlers. In April of this year settlers poured toxic chemicals into the water of the wells. 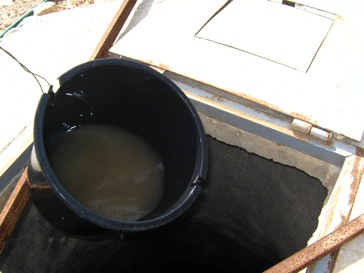 When assessing the barren farmland one Burqa resident, Abu Sami, lamented; “these settlers have completely changed our landscape”. The settler attacks have also targeted many of the Palestinian shepherds that have attempted to graze their sheep on the land surrounding Homesh, many have reported incidents when they were attacked by settlers and had their sheep shot. 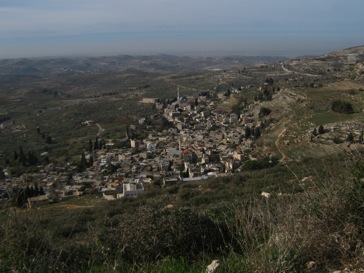 In the years since the evacuation the residents of Burqa and other surrounding villages have received thousands of dollars from organizations like Oxfam Quebec to use, along with their own funds, to build up the land once again, though their attempts have been made futile with persistent abuse and incursion from illegal settlers. Many residents were already forced to leave the area when their livelihood was taken away with the destruction of their farmland and many more will probably be forced to follow if these settler reigns of terror continue. Along with settler violence the residents of Burqa suffer constant Israeli army evictions, invasions and harassment. For all of these reasons the Palestinians of the community have vowed to hold weekly demonstrations to prevent the nightmare of Homesh from plaguing their lives once again, proudly carrying signs proclaiming; “We will fight until we get our rights”.