On Tuesday 2nd December 2008 Gaza Strip, Palestine added two more child martyrs to its already long list of thousands of dead children, the products of U.S. tax-payer money providing the ways and the means for Israel to continue its genocidal occupation and siege. 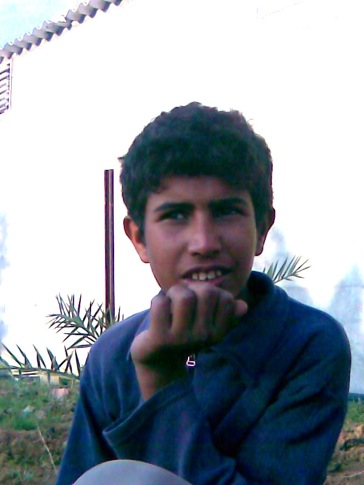 15 year-old Omar Abu-Hamad, born 28th January 1993 and 19 year-old Ramzi El Dahini were blown to bits standing in the street outside their homes – they both lived in the same neighborhood and were also cousins. Two other children were seriously injured and taken to Al-Najar hospital in Rafah, Gaza Strip. Their injuries were so serious that they are being transferred to a hospital inside Israel, since the hospitals in Gaza are so very limited in the treatment they can give to those who need urgent emergency care.

According to Omar’s family, he and his mother were home when they both heard an explosion. It sounded like a gas canister and they went out to see what happened. An Israeli remote operated drone plane had shot a missile nearby. Omar’s mother came back into the house and heard another explosion. She had thought that Omar had come back into the house with her, but he wasn’t around. She went back outside looking for him. She questioned the people in the street about Omar and the neighbors said that he wasn’t there in the street among the dead, for her to look elsewhere. But her heart told her that he was there in the street, blown to bits by the remote controlled missile. She saw a shoe in the street and recognized it as her son’s and knew that he was dead.

She went to the hospital and asked about her son, they didn’t want to let her see him, he was in parts, no longer in one recognizable body.

Omar’s brothers, 17 year-old Emad, 12 year-old Ibrahim, and 10 year-old Mahmoud told everyone how they had found out about Omar’s death. Emad was at home when the shooting took place. He went outside and was told like his mother that Omar was not dead, but Emad insisted on going to the hospital. Once there he went to the morgue and told the technicians to open the refrigerator where they store the dead bodies. He saw Omar’s pants and one of his legs and before seeing the rest of the blown apart body knew that it was Omar. Ibrahim had come home from school and asked about Omar, his mother told him that he had been killed. Mahmoud came home from school and found a house full of women and he was told “your brother was killed”. The people in the street also told him that Omar was dead.

ISM Gaza Strip volunteers had gone to the home of Omar to pay respects and some of the family were reminiscing about him. When Omar was still going to school, in the morning he would stop by at a poor woman’s house in the neighborhood and bring her bread. One day when he went there he found her dead in her bed. After looking closer he saw bullet holes in her wall and saw that she had been killed by being shot by a bullet. This incident impacted him so strongly that he couldn’t focus on his studies and stopped going to school.

His mother reminisced that he was very clever, he could fix anything – the computer, the closet – just give it to him and he would find a way to fix something broken or to build something that was needed. He was also very clever in school.

His sister, Amal, talked about his personality – he would make jokes and he was very helpful. Everyday he would get up at 6:00am and go to his step-mother’s house to take his step brother to the store. She remembered that he had planted the trees outside of their home and had painted his name on the walls of the house. How can they continue to live in this house now?

The family continued to talk about Omar, saying that he had a sheep which had recently had a lamb. The family had decided to not sacrifice the sheep or the lamb for Eid Al-Adha, but to keep them both in remembrance of Omar.

The family talked about the relationship of the father with Omar. The father has been in an Israeli prison for the last 9-10 months and he still does not know that Omar has been killed, murdered by the Israeli occupation force army. His health is suffering and the family is concerned about how the news might affect him. The father used to say that Omar was his right arm and in his letters to the family he would mention how much he depended on him. The family also mentioned that the father had told Omar to write a letter expressing how he felt. Omar asked him to whom he should write the letter and the father told him to write it to a good friend. Omar said the children are my friends. The family remembered that Omar would call a 10 month-old child his son and one of Omar’s younger brothers would call him “Ba”, another Arabic name for father.

Ramzi was at home before the incident, when a friend called by and asked him to go to help repair his bicycle. He joined a group of young people who were sitting on a fence at the side of the road just in front of his house, chatting. A few minutes later the Israeli drone fired a missile. People in the neighborhood had observed the drone flying west, away from the area, and thought it was safe. But then the drone returned. Ramzi’s mother said she heard a loud explosion and ran out of the house to see what had happened. She saw the bodies of the teenagers not realizing that one of them was her son. She went back into her house to get some blankets to cover the bodies as the ambulance hadn’t arrived yet. Ramzi’s brother was on the scene. She asked him if Ramzi was one of the people killed and he told her that he was. It was a huge shock. She later commented that she raised her son for nineteen years only for the Israeli army to steal his future.

The families of Omar and Ramzi are still in shock over the sudden loses of their beloved sons, brothers, cousins and uncles. Unarmed children standing in a field after one explosion hit the area, torn to smithereens by a second murderous missile. These families will have a gaping hole of loss for the rest of their lives. It was a genocidal attack that killed also the future generations of these two man-children. The loss of life reverberates throughout the world – this genocide of Palestinians can be stopped, it must be stopped, the only question is when?!