Adalah-NY: New Yorkers march to demand end of massacres in Gaza and boycott of Israel

New York, NY, December 29 – For the second day in a row, over a thousand New Yorkers marched through midtown Manhattan, chanting and carrying signs and Palestinian flags, to voice opposition and demand an end to Israel’s assault on Palestinians in the Gaza Strip. In the last three days, Israel’s bombing of Gaza has killed over 360 Palestinians. Reports indicate that at least 60 of those killed were women and children. 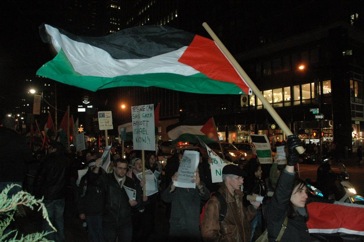 The Monday evening protest, which drew a diverse and noisy crowd of more than a thousand and substantial media, began at 5 PM with leafletting and chanting at Union Square and Herald Square. The energy grew during a symbolic funeral procession for Gaza’s dead from Herald Square to Bryant Park, as marchers carried aloft two stretchers covered in black shrouds and flags, similar to those used in Palestinian funeral processions. The march culminated with loud chanting at the Israeli Consulate at 8:30 PM. It comes on the heels of a Sunday afternoon Manhattan march that drew over two thousand protesters, and will be followed by a Tuesday evening protest at the Israeli Consulate beginning at 5 PM. 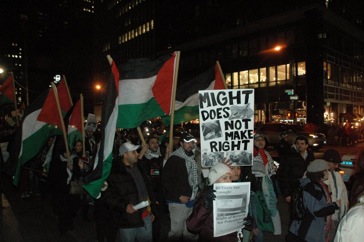 Rush hour pedestrians were handed thousands of flyers c alling for an end to the massacre in Gaz a and a boycott of Israel, and were greeted with chants, including:

“Obama. No more aid. Stop the funds for deadly raids;” and

“While you are shopping, bombs are dropping.”

Riham Barghouti from Adalah-NY explained, “New Yorkers are out in the street because they’re angry that the US government is providing Israel with the planes as well as the hundreds of tons of bombs that Israel is dropping on 1.5 million impoverished Palestinians who are packed together in the world’s largest open-air prison. Silence in the face of such crimes is complicity. That’s why people worldwide are stepping up the non-violent campaign of boycott, divestment and sanctions to pressure Israel to halt its human rights violations. With our government here in the US refusing act, it’s up to us as citizens to mobilize to hold Israel accountable.”

The assault follows nearly three years of a tightening Israeli=2 0blockade on the Gaza Strip which began, with US support, after Hamas emerged victorious in democratic Palestinian elections in January, 2006. More recently, Israel has almost totally sealed off Gaza to the outside world, preventing shipm ents of food, fuel and medical supplies from reaching Gaza’s civilian population, resulting in skyrocketing levels of unemployment, poverty and hunger. Israel has also conducted frequent assassinations and aerial attacks on Gaza, killing approximately 1500 Gazans since 2006 alone. Israel’s siege of Gaza’s civilian population and assaults against Gaza’s residents constitute grave breaches of international law, including the Fourth Geneva Convention. Some observers believe Israel’s attacks were timed to coincide with the holiday season, when most people turn their attention away from world events.

The flyers distributed to passersby provided information on Israel’s attacks and called for support for the growing international campaign of Boycott, Divestment and Sanctions (BDS) a gainst Israel – similar to th e worldwide campaign that helped end Apartheid in South Africa – in order to hold Israel accountable for its crimes. Over the last year, Adalah-NY has carried out a successful boycott campaign against Israeli diamond mogul, settlement-builder and New York real estate developer Lev Leviev.