To view original article, published by Ynet on the 17th September, click here 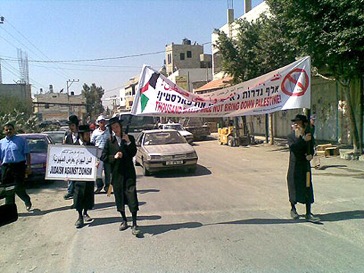 Some 300 Israelis, Palestinians and foreigners took part Wednesday afternoon in an anti-fence demonstration in the West Bank village of Naalin, near the city of Modiin.

Soldiers and Border Guard officers fired teargas at the protestors in an attempt to prevent them from approaching the separation fence construction site. Five Israeli protestors were arrested, two of them photographers documenting the protest.

According to the demonstrators, seven people were injured in the event, two of them from the teargas. Four were reportedly hurt by rubber-coated steel bullets fired by the soldiers and another demonstrator was beaten.

Anti-fence demonstrations have been a routine in recent months, but this time the demonstrators marked the 26th anniversary of the massacre at the Sabra and Shatila refugee camps during the 1982 Lebanon War, which left some 800 Palestinian refugees dead.

Wednesday’s demonstration was also attended by 15 members of the Neturei Karta religious sect, who arrived to express their solidarity with the Palestinian residents. The group members, who traditionally oppose Zionism, often take part in different protests against the State of Israel.

The Neturei Karta disciples, wearing black hats and coats, refused to talk to the media. One of the members of the village’s popular committee, which organized the demonstration, told Ynet that the men had arrived “in order to express their protest over the injustice of the occupation and the fence.”

Some of the men carried signs denouncing Zionism and walked along the village paths.

The demonstrators, which included 50 Israelis, carried signs and chanted slogans against the occupation and the separation fence.