A 20 year old resident of Ni’lin is currently in Ramallah hospital with a a fractured skull after being beaten by Israeli soldiers at a demonstration in the village against the construction of the annexation wall on the 21st August. 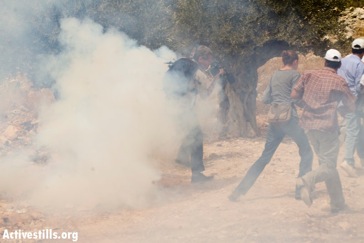 Haitham Mousa, 20, was standing by his Grandfathers house when 5 Israeli soldiers grabbed him and proceeded to beat him, hitting him in the head with the butts of their rifles. Witnesses say that Haitham briefly managed to get free from the soldiers, but as he attempted to run off soldiers fired a rubber-coated steel bullet at him from close range. Haitham immediately collapsed, though whether his fractured skull is due to the beating or from the rubber-coated stell bullet is, as of now, unclear. 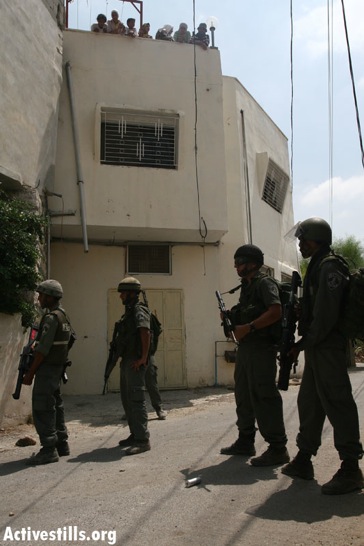 Haitham was immediately taken to Ramallah hospital where an X-ray determined that he had indeed had his skull fractured. His condition is currently stable, though he is in a lot of pain with sever wounds to his face and mouth. 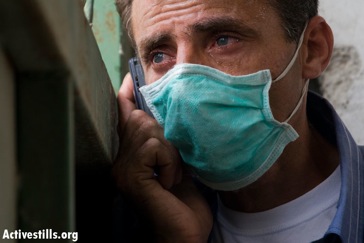 A 13 year old boy, Said Nafa, was also shot in the side of the head by a rubber-coated steel bullet at the same demonstration. He was taken to hospital in Ramallah where he received medical care and should be discharged later this afternoon. 3 other demonstrators were injured at the protest. 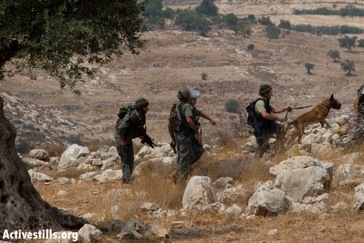 These serious injuries come at a time where extreme violence from Israeli forces in Ni’lin saw the killings of Ahmed Mousa, 10 years old, and Yousef Amira, 17 years old, three weeksa ago.

To date, fifteen Palestinians, ten of them minors, were killed while
protesting the wall.

Abdal Rahman Abu ‘Eid, age 62
Died of a heart attack after teargas projectiles were shot into his home
during a demonstration against the wall in Biddu on February 26th, 2004.

Muhammad Da’ud Saleh Badwan, age 21
Shot during a demonstration against the wall in Biddu on February 26th,
2004, and died of his wounds March 3rd.

Hussein Mahmoud ‘Awad ‘Alian, age 17
Shot dead during a demonstration against the wall in Betunya on April
16th, 2004

Islam Hashem Rizik Zhahran, age 14
Shot during a demonstration against the wall in Deir Abu Mash’al on
April 18th, 2004, and died of his wounds April 28th.

Taha Muhammad Subhi al-Quljawi, age 16
Shot dead when he and two friends tried to cut the razor wire portion of
the wall in the Qalandiya Refugee Camp on February 2nd, 2007. He was
wounded in the thigh and died from loss of blood after remaining a long
time in the field without being treated.

Muhammad Elias Mahmoud ‘Aweideh, age 15
Shot dead during a demonstration against the wall in Um a-Sharayet –
Samiramis on March 28th, 2007.

Mahmoud Muhammad Ahmad Masalmeh, age 15
Shot when trying to cut the razor wire portion of the wall in Beit Awwa
on March 2nd, 2008.

Ahmed Husan Youssef Mousa, age 10
Killed during a demonstration against the wall in Ni’ilin on July 29th,
2008

Youssef Ahmed Younes Amireh, age 17
Shot in the head with rubber coated bullets during a demonstration
against the wall in Ni’ilin on July 30th, 2008 and died of his wounds
August 4th.

Three others, all minors or mentally disabled, were killed just for
being in the proximity of the wall:

Du’aa Naser Saleh ‘Abd al-Qader, age 14
Killed in Far’un when she approached the wall with her friend on
December 19th, 2006.

Fatah a-Deen Muhammad ‘Ali al-Khuli, age 20
Killed near Habla when he approached the wall on January 22nd, 2001. He
was mentally disabled.

Mahyoub Ahmad Nemer ‘Asi, age 15
Killed by a private security guard while he was in his family’s plot,
about 200 meters away from the path of the wall, on July 8th, 2005

From the original 58,000 dunums of Ni’lin land (580 hectares) more than 69% was taken by Israel in 1948, while in 1967 44% of the remaining land was used for construction of the nearby settlements. The annexation wall, illegal under international law, will take a further 25% of the farming land that the village relies on for its income, and will make the once commercial capital of the area isolated from the surrounding villages. This will leave Nil’in, when the wall is finished, with only 10% of its original land (less than 15,000 dunums).