The village of Asira al Qibliya has during the last month suffered from several attacks by Israeli settlers. The settlers usually show up each Friday and Saturday, aiming for the houses in the outskirts of Asira. During the last week at least three houses were attacked. Large parts of Salman Mountain, where the villager have their farming land and grow things such as wheat and lentils, was also set on fire by the soldiers. About 5 to 100 settlers are participating in each attack 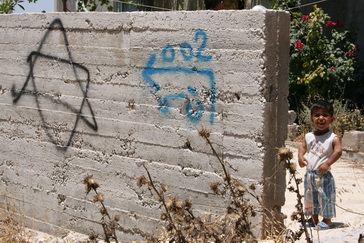 During the attacks the settlers have thrown stones though windows, crashed a car, stolen and killed cattle, torched fruit treas and farmland, fired live ammunition on the houses and water tanks, thrown gas grenades and painted stars of David over the house facades. The families living in the exposed houses are scared, the children can’t play freely outside anymore and the adults witnesses of troubles to sleep worrying of the settlers. When asked if they have ever considered moving to a safer place, one family father told us “Of course we will stay here – since moving away is exactly what the settlers want us to do”. That particular family has lived in generations in the same house making up at least 60 years. The family car was torched and totally destroyed one year ago. A big concern is the olive harvest two months away when the parents has to decide whether to leave their children behind exposed to attacks or leave their house an empty open target for the settlers. Another family has barricaded their windows with stones to protect themselves from live ammunition and was pointing out bullet holes in the wall witnessing of the attacks. Every Friday and Saturday the family locks themselves inside the house to wait out the settler attacks. Recently two villagers were caught by the settlers, of which one was shot in the leg. The settlers then used stones to hit the villagers causing serious damage. 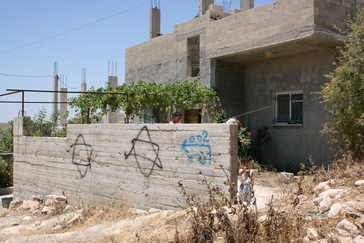 According to the president of the village, the situation in Asira has gotten worse since the start of the Al-Aqsa Intifada seven years ago. Not only because of attacks from settlers, but also due to the restriction of movement, closed roads, poor health care and increased unemployment. Today there is no way out of Asira not passing a checkpoint. Before the checkpoints it took only 10 minutes to go to Nablus, the closest city, but today the travel time can take 2-3 hours up to a day. The settlers also prevent them from reaching their farming land, even if this land is not even close to the settlement.