New
Home / Reports / ISM London: ’60 years of ethnic cleansing is nothing to celebrate’

ISM London: ’60 years of ethnic cleansing is nothing to celebrate’

On June 28th, members of ISM London staged an action against the ‘Salute to Israel’ rally in Londons Trafalger Square. According to the organisers website, the rally was designed to ‘celebrate 60 years of the State of Israel’ and was an ‘affirmation of solidarity with, and support of, Israel’. Hundreds of Israel supporters came to hear Jewish and Israeli music, as well as a speech from cabinet member, and possible future Labour Party leader, Ed Balls. 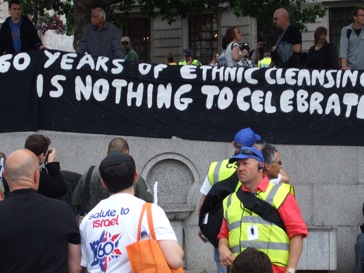 The activists approached the edge of the rally, then revealed a banner displaying the message ’60 years of ethnic cleansing is nothing to celebrate’, visible to all in attendance. The banner was unveiled for a few minutes before an enraged Israel supporter ripped it in half. The police then threatened the activists with arrest, moving them into the designated protest zone away from the rally. They were later joined by activists from Action Palestine, the British Muslim Initiative, Jews for Justice for Palestinians and others; together holding a loud and colourful demonstration against the rally. 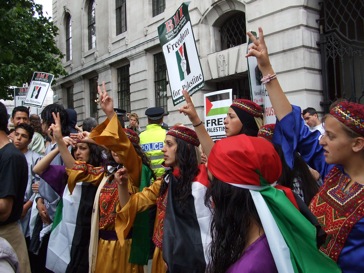 1948 saw over 710,000 Palestinians were ethnically cleansed from their homeland and marked the destruction of Palestinian society as it stood. Some refugees fled out of fear of a repeat of the Deir Yassin massacre at the hands of the Zionist armies, others were evacuated as per ‘Plan Dalet’. They are still awaiting their right to return to their land, a right enshrined in international law and UN resolutions; any celebration of the birth of Israel is also a celebration of this injustice. 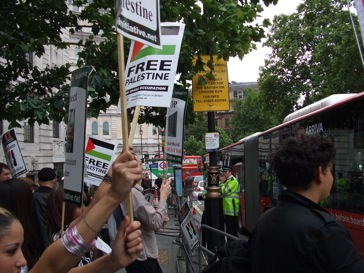 Early Zionists realised they couldn’t build a Jewish state in Palestine without ethnically cleansing the area, and talked openly about about using military attacks to expel the native Palestinian population. David Ben Gurion said “We must use terror, assassination, intimidation, land confiscation, and the cutting of all social services to rid the Galilee of its Arab population”, Moshe Sharett stated “Transfer could be the crowning achievement, the final stage in the development of [our] policy”.

The ethnic cleansing of Palestine continues to this day. In East Jerusalem, land confiscation, denial of building permits, house
demolitions, denial of residency rights, confiscation of ID cards and underdevelopment of municipal services through discriminatory budget allocations have been used to drive Palestinians from their homes, leaving an almost completely Jewish Jerusalem. Combined with West Bank settlement activity, these practices have left Palestinians in only 12% of their original homeland. It is unfortunate that Ed Balls sees this as a reason for celebration.