Summer Against Apartheid Banner at Tel Aviv March Against the Occupation

Summer Against Apartheid Banner at Tel Aviv March Against the Occupation 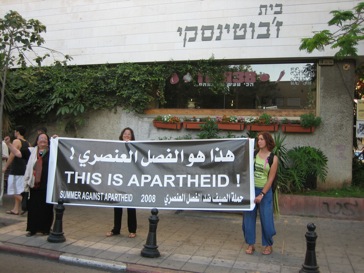 On Saturday June 7, members of the ISM marched through the streets of Tel Aviv with a banner proclaiming “This Is Apartheid!” While participating in a demonstration, organized by Israelis to protest the 41st year of Israel’s occupation of Gaza, the West Bank, and East Jerusalem, the ISMers unfurled the banner and marched down Rothchild Boulevard as hordes of Israeli spectators looked on. The banner garnered much interest with photographers and videographers documenting the moment. Responses from onlookers ranged from questions like, “What do you mean by this?” to angry confrontational statements like “They should take it up the …” 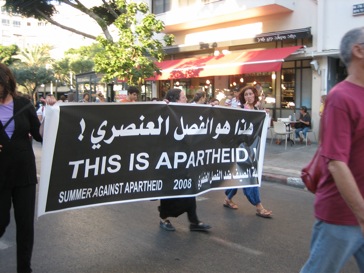 The Tel Aviv march took a path down central commercial streets densely populated with Saturday evening café-goers. A highlight for the ISM contingent was passing with the apartheid banner by the infamous Bet Jabotinsky, named for Zeev Jabotinsky, a central architect of the establishment of the “Jewish State,” and the central headquarters of Israel’s right-wing Likud political party (see photos). 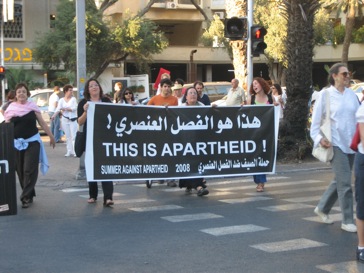 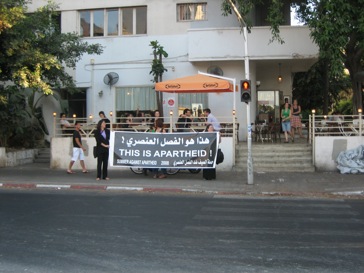