On Wednesday 18th June, approximately forty farmers from the villages of Tammoun and Khirbet Atuf, near Nablus, along with internationals, made a symbolic protest at the Israeli-imposed barrier that prevents them from entering their lands, in the first of what is to be series of protests against the discrimination they face. 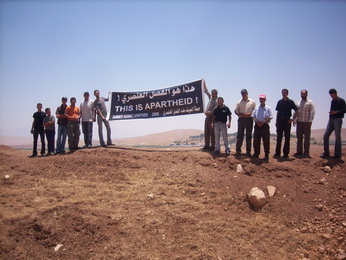 Looking out over the fields to the illegal Israeli settlements of Beqa’ot and Roi (known by local Palestinians as Al Hadidiya, after the Palestinian village it abuts), as well as the Israeli military base, villagers held up a banner proclaiming “This is Apartheid!”, as they stood on the earthmound that demarcates the area in which Palestinians are forbidden to enter. They advise that if they attempt to cross this artificial boundary, they will be shot at. Or they will be arrested and held in the checkpoint of Al Hamra for anywhere between four and twenty-four hours. 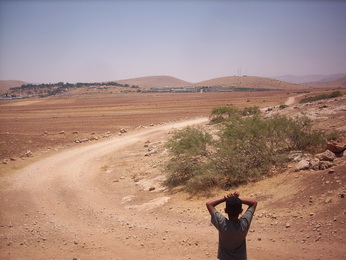 More than seventy percent of the villages’ lands have been stolen by the settlements and military base. Now, the lands they have left (less than thirty thousand dounums) are inaccessible from the villages directly – farmers must make a trip back towards Nablus and around through the Al Hamra checkpoint – a trip that can take up to two hours, instead of the five minute journey that they used to make. Even then, many farmers are not permitted to enter their lands at all, requiring permission from Israeli authorities that is rarely given – and when it is, is only for sporadic times. 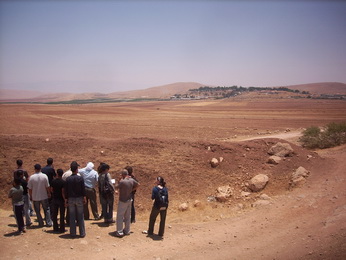 The Israeli authorities also prohibit the farmers from accessing water to irrigate their lands. Whilst Israeli settlers have access to limitless water supplies, Tammoun has access now to just one well, which they are not allowed to dig deeper than 400 metres, useless because a well of at least 800 metres in depth is required to properly function for agricultural use. The effect of this apartheid agricultural system is startling – in a wide swathes of land that is now barren and dry, where farmers can only grow in the rainy season, the settlements stand out for their remarkable greenery. The oasis has indeed been created in the desert, at the expense of Palestinian farmers.

The long-suffering farmers of the Tammoun district received a final blow two days ago, when they received written notification from the Israeli military that a further 356 dounums will be confiscated to create a military training ground, unless the farmers can prove ownership by 2012. While all affected farmers have documentation dating back to the Turkish occupation of the area, many fear that this proof will not be accepted by the Israeli authorities – as in the village of Al Aqaba near Tubas which is scheduled for demolition, where Israeli authorities refuse to acknowledge the validity of their title deeds because they are from the Turkish era.

Motivated by this further injustice, farmers are taking decisive steps, not just to save their lands from this new threat, but to demand their rights to enter their lands from their villages; to irrigate their crops; to graze their animals. With the belief that the Israeli authorities and settlers are trying to drive them from their lands, villagers have vowed to fight – to enter their lands without taking permission from Israelis; and there to hold non-violent demonstrations until they achieve their freedom of movement and livelihood.