Demonstration at Beit Furik checkpoint calling for its removal 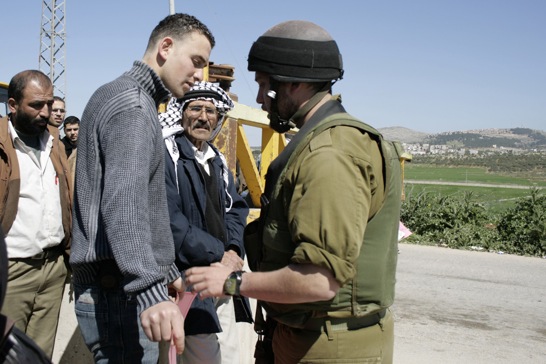 At 10am on Saturday 15th March 2008 approximately 50 Palestinians and internationals gathered at the Beit Furik checkpoint near Nablus to protest against the checkpoint. Internationals and residents of Nablus joined villagers from Beit Furik and Beit Dajan to march to the checkpoint – one of seven that surrounds the city of Nablus, cutting the nearby villages off from the city. Organised by the Beit Furik municipality, protesters demanded the removal of the checkpoint, which is open only from 6am until 9pm each day, only allowing ambulances to pass through after 9pm. The checkpoint also only allows residents of Beit Furik and Beit Dajan to pass through, denying any visits by friends or family to the village. Even this is uncertain though, the mayor of Beit Furik, Abu Hakeem, explained – often the soldiers prevent the passage of any persons through the checkpoint, including those seeking medical treatment. 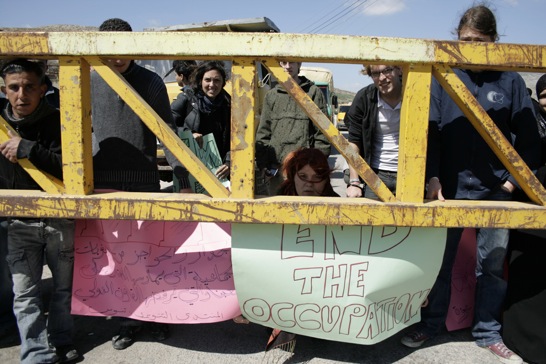 Demonstrators were quickly confronted by Israeli soldiers, who demanded they move back from the checkpoint and cease filming the demonstration, and closed the checkpoint, refusing to allow anyone to pass. Protesters held their ground for over an hour, whilst soldiers wielded guns and tear gas threateningly, despite standing just one metre from the demonstrators.

After long negotiations by the mayor of Beit Furik and a representative from Beit Dajan, the commander of the Israeli soldiers announced that anyone from the demonstration who wished to pass through to the checkpoint would be allowed to do so, reopening the checkpoint to the queues of pedestrians and cars that had formed.

The Beit Furik checkpoint causes major obstacles to the lives of residents of Beit Furik and Beit Dajan, often preventing them from reaching work and university, with students suffering particularly during exam periods, as well as creating economic depression for the villages who cannot easily transport goods and must pay a lot of money to reach Nablus. This is especially true for residents of Beit Dajan whose main road to Nablus was closed by Israeli forces in 2000, almost doubling the length of the route from Beit Dajan to Nablus.

The peaceful demonstration demanded not only the removal of the checkpoint, but also an end to the Israeli occupation that imposes the checkpoints throughout the West Bank. Protesters also carried banners calling for an end to the siege of Gaza, and protesting against the recent Israeli army attacks that killed over 100 people, including 25 children and injured more than 200 Palestinians.

This demonstration marks the first in a planned series of fortnightly demonstrations against the checkpoint, demanding its removal.