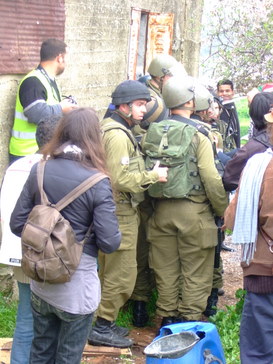 On February 15, 2008, around 80 Palestinian, Israeli, and international activists took part in the weekly Friday demonstration in the village of Bi’lin against the illegal Annexation Wall. The Wall cuts off 60% of Bi’lin’s agricultural land and, in a decision by the Israeli Supreme Court, has been ordered taken down and moved back. The entire Wall has been declared illegal by the International Court of Justice.

The demonstration began as usual with internationals, Palestinians, and Israeli activists marching up the narrow village road towards the Wall on the outskirts of the village. Israeli troops were stationed on the far side of the Wall across the no-access roadway running parallel to the Wall. As soon as the demonstrators reached the Wall, the soldiers began to fire rubber-coated steel bullets. One cameraman was injured in the face, and his camera broken. Many of the demonstrators dispersed while several Palestinian youths began to respond to the military violence with stones. 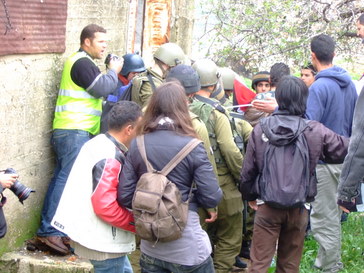 After most of the demonstrators had retreated back to the village roadway, another march forward was organized. This time the demonstrators remained near the main gates where they chanted and displayed the Palestinian flag. There was no response from the soldiers on the far side of the Wall.

It was then discovered that a squad of Israeli soldiers had infiltrated the Wall and were hiding alongside a house above the village roadway. The soldiers were surrounded by the demonstrators and after a brief confrontation, were allowed to withdraw from their position and retreat to their positions on the far side of the Wall. The main group of demonstrators returned along the road to the village, disturbed by volleys of tear gas and rubber-coated steel bullets from the soldiers. 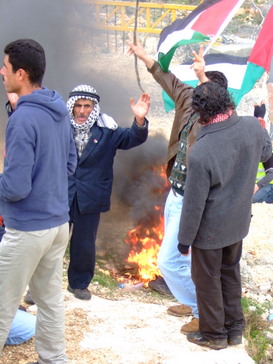