On Friday 9th November, Oday Abdel Odeh was arrested whilst attending his uncle’s wedding in the village of Azzoun, near Qalqilya. Oday, sixteen years old and from the nearby village of Kafr Thulth, was standing with a group of friends at the celebration when Israeli soldiers approached, beat the youth and arrested him, witnesses report. He is currently being held in custody in Hawara camp, although it is unclear as to whether any charges have been laid against him as his family are unable to contact him, and he has not been granted access to a lawyer.

Approximately one hour after the arrest, 30 Israeli soldiers entered the small village of Kafr Thulth, declared a curfew around the family’s residence, and proceeded to break down the doors of their house in order to search the premises. One uncle was present when this occurred, with the rest of the family still in Azzoun. The uncle reports being kicked and punched by soldiers when they entered the premises, after which they ransacked the house, destroying furniture, and emptying the contents of all drawers and wardrobes. The family has no knowledge of the reason for the raid, no clue as to what the soldiers were searching for. 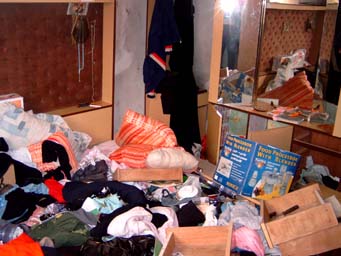 It is currently unknown why the youth was arrested, or for how long he will be held. The Prisoner’s Support and Human Rights Association, ADDAMEER, has advised his family that it is likely Oday will be held for a minimum of twelve days before he is allowed access to a lawyer. From their own experiences of having been randomly arrested by Israeli soldiers, family members suppose Oday is being held in isolation, and being subject to regular beatings. As yet their only information as to his whereabouts have come from Israeli Human Rights groups, such as Machsom Watch and Hamoked. The family has made a formal complaint about the arrest to the UN through the Palestinian Democracy and Workers’ Rights Centre.

It has been revealed that the four youths who were arrested from an internet cafe in Azzoun on 10th November were subject to prolonged beatings as they were interrogated by Israeli soldiers.

One of the youths, who is sixteen years old, disclosed that the arrestees were taken from the internet cafe where they were playing computer games, and beaten, before being lain face down on the floor of a jeep with Israeli soldiers kicking and stamping on them. They were then driven to the settlement of Karne Shomron, where they were held for four hours as soldiers interrogated them as to whom in the village had been throwing rocks; who had guns. Throughout this time, all four of the youths were blindfolded with arms bound behind their backs. They were forced to sit on the floor, bent over, while they were punched, kicked and slapped repeatedly in order to elicit information from them.

The youths were then driven off, and released by the side of a road at 8pm, approximately 12km from Azzoun. They were told by the Israeli soldiers that they would be killed if they were caught throwing rocks.

This seems to be not just an idle threat made by low-ranking soldiers. In a meeting with the headmaster of the Azzoun High School yesterday, the new Commander of the Israeli forces based at Azzoun advised the principal that no longer would youths throwing stones be met with the collective punishment of curfews, as have been forced upon the people of Azzoun for the past two weeks. From now, he advised, should any youths be caught throwing stones, Israeli soldiers will kill them.