On Tuesday, November 20th, international Human Rights Workers (HRWs) were alerted to a military invasion in the Fara’h refugee camp, near Nablus. The military had surrounded the camp during the night and the attack began around 1 am. The army was said to have been looking for wanted men, and though they arrested around eleven people, it is unclear if they got who they wanted.

HRWs arrived around 8 am, while the military was still attacking the camp. They visited a formerly occupied house, one of five, which showed doors smashed in, furniture destroyed, belongings scattered, and a six year old child who had recieved a rifle butt to the face. The child was soon after taken to the hospital. During this time the army were continuing to drive their hummers and bulldozers quickly through the camp, shooting at both the unarmed refugees, and their vehicles. Windows of houses and cars had been shot out, as well as the electricity transistor, causing $15,000 worth of damage to the transistor and taking out the electricity to the camp. 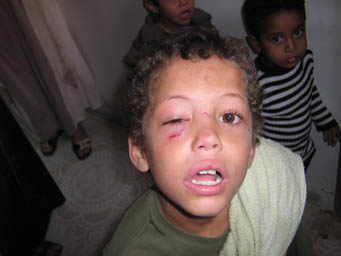 After the army had left HRWs met in one family’s house and spoke to people from the camp. In the house where they met, the wall had cracked open and the concrete gate outside had been smashed when an Israeli bulldozer picked up the family’s car and threw it at the house. The car is of course destroyed. The refugees talked about when the army came in the night, how people whose houses were occupied were forced to stand outside in the rain, how some of the men were forced to stand under the drainpipes during the downpour. They said the army drives through often, though they do not always attack.

Fara’h refugee camp holds around 6,000 refugees, and today school was cancelled for the children. The older students, many of whom go to Al-Najah University and had exams today, were prevented from taking them due to the invasion.