Israei Army Violence at Roadblock Removal in Izbat at Tabib

The people of Izbat at Tabib, together with Israeli and international activists, partially removed a new roadblock cutting off their access to route 55, the road linking Nablus and Qalqilya.

Work started to remove the earth mound roadblock at approximately 11.30am. Within ten minutes the Israeli army arrived, who threatened to use force if the workers did not evacuate the area within ten minutes. Defiantly, the workers continued until more soldiers arrived on the scene and threw two sound bombs into the crowd, reducing a nearby elderly woman to tears.

The army advanced towards the crowd and arrested two Israeli activists, though both have now been released.

The roadblock was erected eleven days ago at the turnoff from Izbat at Tabib onto road 55, and has made the normally simple journey to Qalqilya, where many people work, into a long and arduous trek. 20,000 people from the villages of Isla, Jayyus, Azzun, Izbat Abu Hamada and Khirbet Sir are affected, as all use the turnoff to get to Qalqilya. 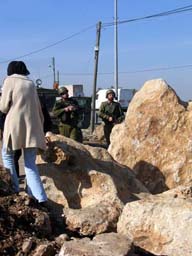 The roadblock is part of an ongoing crackdown in the Qalqilya region. Many new roadblocks have been erected in the last few days in the run up to Annapolis. From Al Funduq down to Isla, the new roadblocks, and system of curfews throughout the region, have made travel all but impossible.

Since 2000, the Izbat at Tabib roadblock has been put in place many times. Villagers have removed the roadblock before, and will continue to do so until they get their basic right to freedom of movement in their home region.