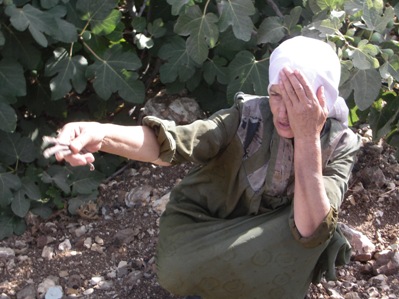 From her house she can look towards the mountain on the other side of the valley, where she has her 10 dunums of land. In order to access it she has to pass a road that now only settlers and the military can use.

A settlement was built 6 years ago on the top of the mountain next to her land. One year ago she got permission from the District Command Office (DCO) in order to go to her land for the olive harvest, but when she arrived the settlers had already taken most of her olives and only one basket was left for her to fill. Shortly afterwards the settlers returned and burned down her trees. 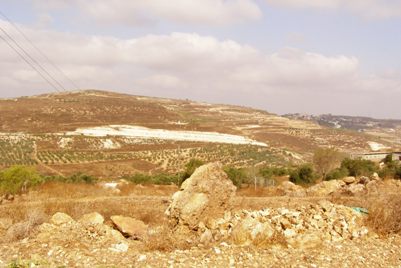 Since this episode she has not been able to reach her olive groves. Yesterday she tried to gain access to her land accompanied by three workers with a tractor. Before they reached the land they were confronted by a group of settlers who had brought guns and dogs with them. They threatened to kill the Palestinians if they did not leave the area immediately.

Zaynab Turabi is now so frightened that she does not even dare to try approaching her land. Her only possibility is getting a new permission from the DCO which is unfortunately highly unlikely.