New
Home / Journals / Journal: About the Combatants for Peace Meeting in Shufa

Journal: About the Combatants for Peace Meeting in Shufa 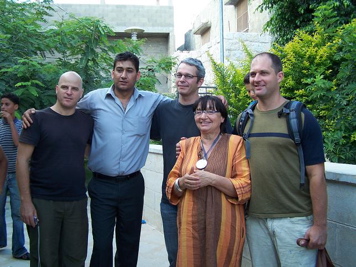 A meeting of Combatants for Peace, with an audience of more than one hundred people, took place in this small village adjacent to the illegal settlement of Avne Hafez and with a checkpoint blocking the only road that leads out of the village.

The presence of the illegal settlement of Avne Hefez resulted in the closure of the main route that used to connect Shufa with Tulkarem city. Previously it would take ten minutes to travel between the two towns. The inhabitants now need over one hour to travel from one to the other, greatly decreasing their ability to access university or work both through the added time and also the significantly increased expense. The village is also not connected with the electricity network and consequently depends on a generator to have an energy supply. The increasing isolation of Shufa by the illegal occupation is killing the future of the youth from the village, who grow frustrated and desire nothing else than to leave their community.

Combatants for Peace is a movement started in 2005 jointly by Palestinians and Israelis who have taken an active part in the cycle of violence within the Israeli-Palestinian conflict. The former combatants believe in joining forces and in using non-violent means to terminate the Israeli occupation, to halt the construction of illegal settlements and to establish a Palestinian state with its capital in East Jerusalem, alongside the State of Israel. Their goals are to raise consciousness in both the Palestinian and Israeli spheres, to create partners in dialogue, to educate others towards reconciliation and non-violent struggle, and to put political pressure on both governments to stop the violence and the occupation.

Attending the meeting in Shufa were former Palestinian and Israeli combatants, nowadays struggling through non-violent methods for ending the occupation and achieving two independent states. Also present was an Italian member of the European Parliament, Louisa Morgentini, who recognizes Europe’s responsibility in resolving the issues of political prisoners, the apartheid wall, the illegal settlements, the checkpoints and other occupation measures, in order to achieve real and lasting peace between the countries.

Former Palestinian fighters explained that they had to justify to their people why they had joined former Israeli soldiers. For them the answer is that they want to have real peace, and to follow the example of non-violent liberation from the occupation of other countries, such as India or South Africa. For those former combatants, speaking together with the Israelis is the beginning for both nations to be in peace, moreover with an international presence, as in fact happened in the meeting.

One of the testimonials in Shufa came from a former Israeli soldier, who now works as a teacher and is the father of a small girl. Until three years ago he was a soldier in Israeli forces. For fifteen years he was a commando. His reasons for becoming a professional soldier reach back to the way Israeli youth are brought up and educated about their culture, history and current context. From an early age he was taught that this was the country of Israeli people and others living there were just preventing them from living in peace. They told him that Israelis were always peaceful while Palestinians were always violent.

In this way, joining the army was for him a means for defending Israel from the Palestinians, instead of thinking that he was committing crimes in the occupied territories, as in fact he was doing. In 2001, during the Second Intifada, he was near a settlement looking for armed groups shooting in nearby roads. Waiting for them, he found an old man picking up nylon bags and going to the fence. He couldn’t reach is home without making a very big tour. After seeing that, he said to his soldiers that he was not going to participate in these actions anymore. But four months later, in Jerusalem a suicide bomb explode near him and he went to give assistance to the injured people. Then his unit called him to go to Jenin and he, worried about the pressure of his society, went there. He participated in the Battle of Jenin knowing that it was a crime, but without the courage to say no to his commanders. He would need another terrible event to be able to say no.

He went with his platoon to a small village to arrest someone wanted for investigation. Walking in the night, leading his platoon, he knew that he was doing something unacceptable. They blocked houses around, preparing the scene for arrest, the soldiers shot to the walls many times just to show they were there, without knowing how big the walls were. The commander told them to be aware of children because the inhuman Palestinians used them by strapping bombs to them. It was three in the morning, a mother and her three daughters were the first ones running out of the house. One of the small girls was so afraid that she ran towards them. They also were afraid, so he shot in the air and the girl stopped running. He knew that his shot killed her soul. For some seconds she looked at his eyes and that was for him like a heavy hammer on his head. He knew that if he wouldn’t stop then nothing would touch his heart anymore. So he and his thirty soldiers wrote a letter to the Prime Minister stating that they planned to end their participation in activities in the West Bank. They said they were ready to serve in the defense of Israelis, but not to serve in Israeli attacks.

That was three years ago. Then he joined Combatants for Peace. There are Israelis who think that by participating in violence they bring peace and freedom to Israel and peace to the Palestinian people. He realized however that violence just brings more violence. He was also surprised to realize that most of the Palestinian people want peace and that many of them struggle through non-violent means against the occupation. Unfortunately, Israeli media often doesn’t show the peaceful acts between Israelis and Palestinians such as this one being held in Shufa.

Another testimonial came from a former major in the army. He said that he considers himself a war criminal, having attended seminars on International Law. He personally carried out and gave order for illegal arrests, collective punishment and other war crimes.

He grow up in a Zionist house. His father was also a soldier. They told him that, as a soldier, he would save his country and his family. His grandfather was born in Poland, and the Nazis had killed his family. So he grew up with stories about Zionism and about how they would only be safe in Israel. He felt that the only way to avoid another holocaust was joining the Army. This way of thinking is a part of the “Israeli paranoia”. He was four years in regular Army and ten in reserves. So he has been everywhere in the West Bank and Gaza Strip.

He had given commands to arrest a nine-year old boy and to separate children from their parents in the middle of the night. Sometimes, in the morning, he could be discussing with his wife the best way to decorate the house and in the evening he could be demolishing Palestinian houses after dragging out their residents. Other times, he would worry in the morning because his little girl had a fever and would carry her to the doctor, and in the afternoon he was at a checkpoint preventing people with serious illnesses to go to the hospital. He did all that without thinking about what he was doing, just following orders, but little by little he realized that he couldn’t do it anymore. Then he refused serve in the occupied territories because that behavior is inhuman and not a way for achieving peace.

The above are just two of many testimonies and views of ex-combatants from both the Israeli and Palestinian side. It was considered a privilege to witness some of these testimonies, which offer hope to finding a peaceful resolution to what has been a long and violent conflict.