Bilin: Four Detained as Military get Physical with Demonstrators

About 100 international, Palestinian, and Israeli activists, and demonstrators, gathered in Bil’in village on the morning of August 10th 2007 for what was to be the 131st demonstration against the illegal Apartheid wall and the Israeli settlement of Modiin Ilit.

It would be the first demonstration since the illegal squatting by Israeli settlers on unfinished homes in the settlements, a consequence of the bankruptcy of Heftsiba – an Israeli real estate company. The bankruptcy came about as a consequence of a court order delaying the construction of homes in the settlements of Modiin Ilit, Matityahu Mizrah, Betar Ilit and Maleh Adumim.

On a normal Friday, the demonstration would take place at approximately 1pm following midday prayers, however today organizers had decided on a new strategy. The original idea was to initiate the demonstration at 10am, approaching the Apartheid Wall at a time when there would be fewer soldiers which would enable the demonstrators to do essentially what they came to Bil’in to do: demonstrate. This seemed to be an increasingly difficult task as week after week soldiers fire tear gas, sounds grenades and gas canisters before demonstrators get anywhere close to the Wall. Unfortunately, the military were well informed of the demonstrators time change and were prepared at 10:00am to disperse the demonstration. The demonstration began shortly after 11am, later than the soldiers had expected, but also much earlier than usual.

Demonstrators marched enthusiastically towards the Apartheid wall, chanting and shouting, expressing to the world and media about their hopes for an end to the occupation, their desire to see the Apartheid wall brought down, and wish for the soldiers to go home. As with most demonstrations in Bil’in, things didn’t stay enthusiastic for very long as Israeli soldiers and border police quickly released a hail of tear gas canisters and sound grenades upon the demonstrators. 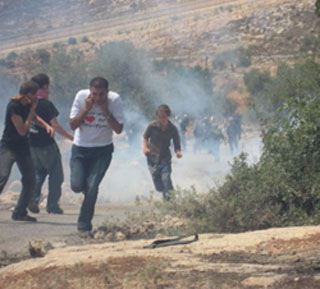 As demonstrators moved back to avoid the gas, the army began to encroach upon them, moving through the olive groves from the road and from the flanks. When they came upon groups of demonstrators, with their hands held to the sky in order to show they had no weapons, there was still no hesitation by the soldiers in throwing further tear gas canisters and firing sounds grenades.

When the soldiers and border police saw that some demonstrators refused to leave the area they attempted to arrest a local Palestinian man known as Abdullah. Several international activists came to his assistance, helping to prevent the army from taking him in an arbitrary arrest. The soldiers were not willing to give up so easily and grabbed and kicked at activists trying to get them to let go of Abdullah. However the demonstrators managed to hold onto Abdullah and he was not arrested.

The army continued to attempt to arrest a number of other international and Palestinian demonstrators in a form of harassment designed to beat them down and break their confidence, but due to many quick actions on the part of the demonstrators many were able thwart the army in their attempts to disperse the demonstration.

It seemed that the demonstration was going well, for the demonstrators, until the Israeli soldiers managed to take a British activist. The activist was asthmatic and was struggling to breath when the soldiers grabbed him and, between four soldiers, carried him away while he was still desperately trying to gasp for air.

A local Palestinian man offered to speak Hebrew with the soldiers, trying to alert them to the arrested demonstrators condition, but was arrested. A further Palestinian man was grabbed and detained, for no apparent reason, along with another French activist present. Beyond this, many of the activists suffered various injuries varying from tear gas inhalation, through to cuts bruises and grazes from the military as they pushed, shoved, beat and kicked demonstrators; attempting to arrest many more. The most serious injury was a severe cut to the head of a female demonstrator who was hit by an Israeli soldier as a group of them tried to arrest her. In total were five people were arrested (though later found to just have been detained): two internationals and three Palestinians.

For some time after the soldiers continued to fire tear gas at the demonstrators and eventually after some time demonstrators appeared to be given sufficient space and time amidst the tear gas to enable them to retreat. Demonstrators walked back to the village, hands held in the air in a gesture of non-violence, yet as what appears to be a last glance round, the military began throwing tear gas once more towards the demonstrators with no apparent regard for the fact that they were retreating anyway. 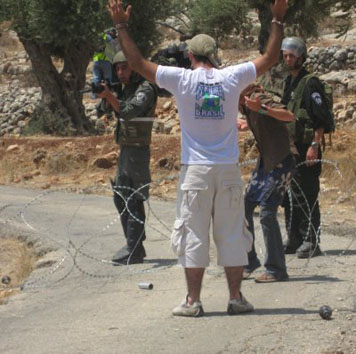 Demonstrators re-grouped at the International House in Bil’in and after a period of rest, and refreshment, activists were called to begin the demonstration once again. There was a decision to go back once more in order to get as close to the apartheid wall as possible, and hopefully convince the soldiers to release their detained friends.

After about fifteen minutes, with the demonstrators inching closer and closer to the soldiers, an officer came to speak with the crowd. An Israeli activist, present with the remaining demonstrators, negotiated with the army officer that they would be able, three at a time, to approach the apartheid wall; which had been the goal of the demonstration at the beginning. The Israeli activist also managed to convince the soldiers to release their detained friends. However Palestinian youth, unaware of the negotiations, and angry at the military aggression in their village, threw some stones on the soldiers, who were, at the time, distracted by the demonstrators. This managed to effectively cease all negotiations, and the detained demonstrators were held for a longer time as the soldiers chased after these Palestinians youth: firing rubber bullets as well as tear gas on them.

At around 12 PM, an international observer was detained by border police while trying to obstruct the passage of around 20 soldiers and police involved in arbitary violence towards a Palestinian man. This man had become separated from the rest of the demonstration because of sound bombs and tear gas being thrown by the police, and was subsequently being pushed, kicked, and punched by police and soldiers.

The observer chose not to walk and was carried away by 6 border police. The arresting party was followed by a camera with a live feed to Israeli TV. When the camera left the soldiers began to kick and punch the detainee. They tried dragging him along the ground by his hair and then one officer stood on his face, while another twisted his arm, and another kicked him in the side. The observer also had asthma which was being triggered by the attack. Needless to say he agreed to walk.

However, when he stood up one solder grabbed him by the throat and began to strangle him. When this officer released his grip the observer attempted to use his inhaler but was prevented from doing so. One officer actually pulled his hand away from his face while he was trying to use it and broke the inhaler. A second observer, seeing what was happening ran after the soldiers shouting to them that they needed to allow him to use his medication. The officers detained him also.

They tied both the detainees wrists with plastic cable ties and took them to a razor wire pen where there were already two detained Palestinian men. The pen, on the ‘Israeli’ side of the annexation wall, was around two meters in diameter, in the sun with no shade. After a few minutes the asthmatic detainee was finally seen by a medical person and was given medication, before being returned to the pen. All four detainees remained there for for over 3 hours,leaving the detainees with sunstroke and sunburn. One of the detainees shirts was ripped off his back in his arrest making detention in the sun even more dangerous.

After around 3 hours all 4 detainees were escorted back through the annexation wall and released without being given a reason for their detention.

The detained demonstrators were all released between 3:30 and 4:30pm into the village of Bil’in, and fortunately none were arrested.