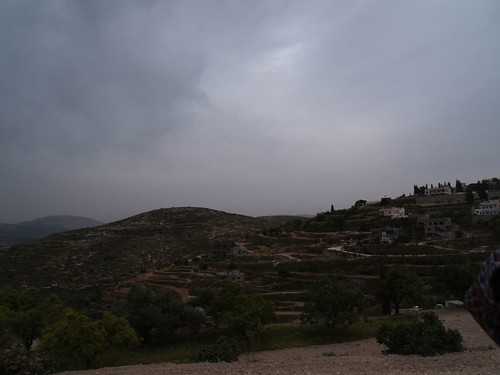 Beit Leed is a Palestinian village located between the cities of Nablus and Tulkarm. It is a village completely isolated. Whether you are coming from Nablus or Tulkarm, one must cross through a checkpoint, littered with young Israeli soldiers, metal detectors, cages, turnstiles, and lines of people just waiting and waiting and waiting for the Israeli soldiers to let them cross so they can get to their jobs or to take their exams or visit family members.

What has been happening in Beit Leed almost every Wednesday night for the past three months may be nearly unbelievable for many minds of the readers of this entry.

Imagine this: You live in Pennsylvania. Canada comes into your state and sets up these military installations throughout your state. These installations come in the forms of 25 foot high walls, trenches, fences, sniper towers. Then you have checkpoints, armed with Canadian soldiers. Many of them do not speak English but they speak French. And you have to explain to these Canadian soldiers why you want to cross from your Pennsylvanian neighborhood to the next Pennsylvanian neighborhood where your sick Pennsylvanian grandmother lives. Pennsylvania is hot in the summertime. You are caged in with hundreds of other Pennsylvanians, waiting in queue until it is your turn to explain yourself to the Canadian occupiers of your neighborhood. “No Smoking” signs are scattered throughout the cage in which you are waiting. Nerves are up. It’s hot. Soldiers are laughing in an air-conditioned booth and your physics test is already half over because you have been stuck like an animal in this fenced in area.

Now, imagine this as Palestine. This is the Huwara checkpoint leading into the main part of Nablus. Then you reach another one before the village of Beit Leed.

On these Wednesday nights, the Israeli military uses the village and villagers of Beit Leed to practice a war-games scenario. The army has chosen Beit Leed because it resembles Syria or Lebanon. This their practice ground so they don’t have another failed war like last summer’s.

This is what the mayor of Beit Leed had to tell us: 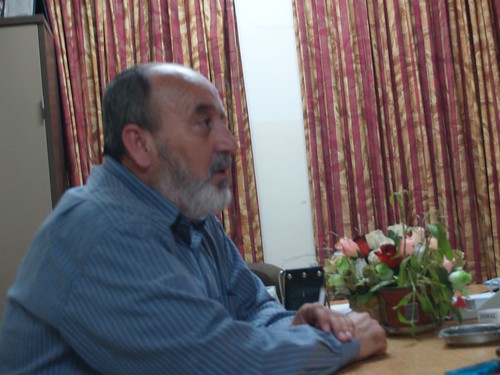 “In our town here in Beit Leed, people live peacefully. Most of the residents here are farmers or workers. They go to bed early because they have to get up early. You go to bed as a father and you wake up early from the screams and the yelling of the soldiers around your house and they scream really loud. They sound like animals and then your kids wake up. And you know that, as a father, you can’t protect your child, you try to comfort your child but you know that you aren’t even secure yourself. So, what do you expect from a child that grows up in this situation and wakes up every night to invasions and gunfire and soldiers going through our homes.”

“And also, I am not against anybody. I am not against Jews or Christians. But I want to ask a question to the western societies… Why is it that when I go to the mosque to pray, I am a terrorist? But when a Jew or a Christian goes to a synagogue or church they are called religious? Why is it that if I grow a beard I am called Hamas but some of you here have beards and you are not called this?”

“I respect all religions. Jews they have their own and I have my own. All these three religions: Judaism, Christianity, and Islam, they all have the same God.”

“Why does the army came here at night to our town? Why do they come to our homes and at night? I believe that in Israel they have open wide areas where they can practice their training. So why do they come here and why at night if they are not here to terrorize people and make people get scared? Why don’t they do it inside Israel or somewhere else but not in a big population of Palestinian people?”

“The fear of the soldiers invading our homes in our town- of them being inside of your home, that at anytime they can come inside your home makes you very scared.”

“The number of traumatized children has increased recently. Usually they wake up at night from nightmares, especially from the recent military training. Also, in the morning, kids prefer to stay at home instead of going to school because they are scared of going outdoors and facing the soldiers. You can imagine that that’s for the kids- but for the old people, like myself, when I want to go to the mosque to pray, I prefer to do it at home. Or to go to work, i prefer to stay here because I am afraid. Imagine if this is how an old person feels, how these little children are feeling.”

“For the Palestinian child, the Israeli soldier is a nightmare to them. And if Israeli really wanted peace, and it is clear that they do not want this, they should at least want to give these young Palestinian a good image about Israel because our children only know these soldiers with a gun and in their nightmares. So, when they grow up, this is the only image they will have of the Israelis in Israel.” 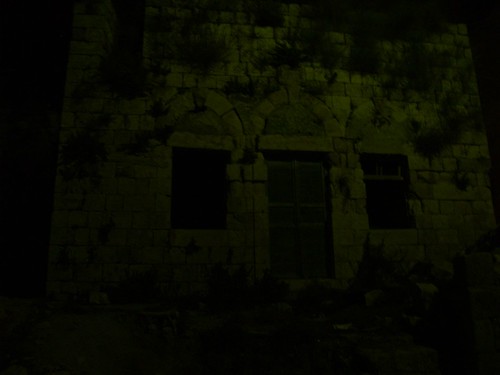 “This training has been going on for almost three months. The army drops the soldiers by helicopters on the top of the hill. And early in the morning around 2 or 3am they invade the village. Of course, the army doesn’t announce anything. They do this because they want the psychological effect to be higher on people, for the Palestinians to be surprised by the army’s presence.”

“We tried to contact some legal organizations. We contacted human rights organizations inside Israel, contacted the Israeli media. There have been some reports on what is happening in our town. But our resources are no many. And the Israeli is above the law. They do not use the law in their invasions. And of course, if they were using the law, they wouldn’t be here. But according to international law it is illegal yet they still come.”

“In response to these reports that have been published about Beit Leed, a military commander has said, ‘The Israeli army has the right to come to the West bank and to trainings in Palestinians towns and villages.'”

So, with this in mind, with cameras in hand, with fluorescent jackets on our backs, we set out into Beit Leed around midnight to catch this breach of international law on tape.

The winds were strong and it was humid. Some rain arrived and with it went the street lights. Absent from the streets (starting at 10pm) were Palestinians, except for two guides and curious residents who questioned us about why we were there and to tell us their personal stories.

We found out the next day that a small Israeli army regiment actually invaded a nearby Palestinian village near the illegal Israeli settlement of Kedumim.

Regardless, at least Beit Leed had a better night sleep Wednesday night. But just like the army, we’ll be back. They’ll have the war games/state-sponsored terror practice book. We’ll have our cameras and our journals.

And you’ll all be sleeping comfortably. There is not Canadian Occupation. No checkpoints before arriving to work at the hospital. No 18 year old soldiers rummaging through your briefcase before reaching your second grade class where you teach social studies. No walls of Apartheid separating you from your favorite coffee shop across the way.