One arrested at demonstration against land destruction

One arrested at demonstration against land destruction in Artas, Bethlehem

UPDATE 26 May 2007, Gaby Lasky, George’s lawyer, relayed the news that George has been released from Israeli police custody in Hebron.

George was scheduled to appear for trial in 5 hours, around 20:00, this evening at the Russian compound in Jerusalem. Gaby stated that the Greek consulate was very active, which may have pressured the police to release George before the trial.

Greek consulate representatives and solidarity activists were planning to bring video evidence of George’s innocence to the court. George was being faced with trumped-up charges of “assaulting an office leading to injury” and “disrupting soldier’s work.” The video, to the contrary, shows George and other activists being assaulted by the soldiers immediately prior to George’s arrest.

Today, May 25th, the residents of the south of Bethlehem area held a large demonstration against Israel’s Apartheid Wall which separates them from Bethlehem and steals their lands. The demonstration started in the village of Umm Salamuna, where Palestinians, Israelis, and internationals held a soccer game on the path of the Wall.

From there, at least 150 activists made their way to the village of Artas to protest Israel’s land destruction. This was a non-violent demonstration, aimed at reaching the land of the Abu Swai family, which soldiers claimed today was a “closed military zone.” After Friday prayers on the land, the non-violent demonstrators attempted to cross the barricade of Israeli soldiers. The army responded with force. George, an activist from Greece, was arrested and is currently being held in an Israeli jail in Hebron. 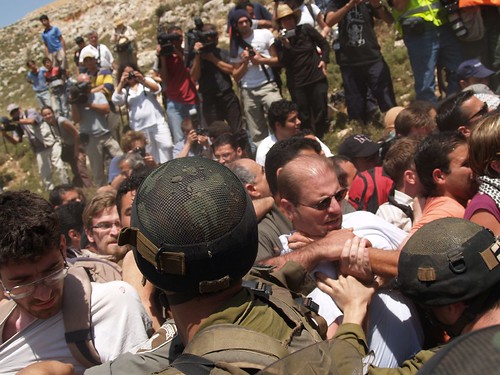 Martinez described the incident: “The demonstrators were completely non-violent. Not a single stone was thrown. But the soldiers started to beat and kick people. I saw at least two people being choked by soldiers. Then they went after George. He wasn’t doing anything but they arrested him anyways.”

An Israeli activist heard one of the detaining officers say that George was being arrested for “assault.”

After half an hour, the demonstrators sat on the ground affront the soldiers, refusing to leave the area. The demonstrators all then began shouting, “We want George! We want George!” The army, however, placed George in a police jeep and escorted him to an unknown destination, though it is believed that George is in one of the police stations in the Hebron area.

Early Sunday morning, an Israeli bulldozer destroyed an entire orchard of apricot trees in spite of attempts by villagers and other activists who slept on the land to stop it. Occupation soldiers continued their work and ate sandwiches as farmers wept at the site of their ancestral land being ripped apart. Three Palestinians were arrested the following day for continuing to protest the land destruction. They have all recently been relased.