New
Home / Reports / Turning the other cheek near Bethlehem

Turning the other cheek near Bethlehem 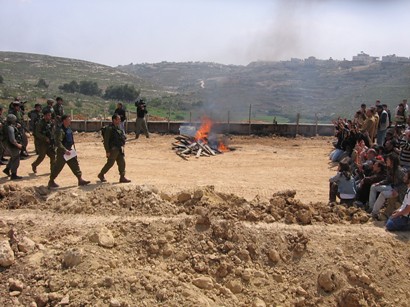 The first visible achievement of the non-violent resistance of the Ma’asara villages was visible even before the demonstration began. When people began preparing for the demonstration they noticed that, unlike previous Fridays, there was no construction today. The bulldozers were parked far away in their fenced lot and the security guards were nowhere in site. However many soldiers were waiting on the opposite hill to the demonstrators, assuming that the demonstrators would just leave. 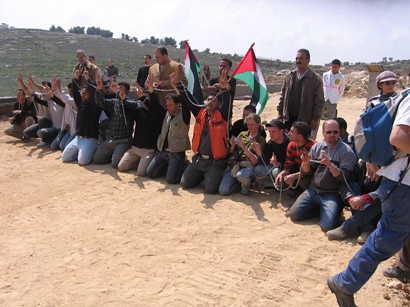 As it turned out, work was performed at the site after all. A little role play game: the demonstrators turned into a demolition crew. They broke cement foundations laid down for the wall, filled holes dug for posts and also broke and torched wooden frames used to lay more foundations. This was the most constructive work on the part of the army that was done at the site since construction started. Palestinians were literally breaking the cages which were being built to jail them in. However, they army could not let a good deed go unpunished. The non-violent demonstrators were attacked by paramilitary units, injuring 10 of them with blows to the face and body.

In addition, Palestine Solidarity Project organizer Yusef Abu Maria was arrested and will likely spend days in jail before he or his lawyer will even be told what he is accused of. Abu Maria stands out at the demonstrations as a determined activist who inspires others with his fearless willingness to face army brutality.

Throughout much of the demonstration, Abu Maria and others chained their hands together to symbolize the damage that the wall will cause to their lives and to demonstrate their non-violent nature. Indeed, even as they were repeatedly kicked and punched by Occupation Forces, none of the demonstrators raised a hand to harm their attackers. Instead, as could have been seen in several press photographs, Abu Maria raised his right hand defiantly to signal a V as he was being beaten.